"Batman R.I.P. Heart of Hush (Part 3 of 5) - Heartstrings": Selina is changing her outfit on her apartment when suddenly, Hush comes out of the shadows, startling her. She kicks Hush through a window and they take the fi

Selina is changing her outfit on her apartment when suddenly, Hush comes out of the shadows, startling her. She kicks Hush through a window and they take the fight outside, where Selina gets the upper hand of the fight, despite Hush's insidious commentaries against her. Selina then rips the bandages from Hush's face and she is astonished to see the face behind the rags. Hush takes advantage of Selina's surprise and, arming himself with a sharp blade, he stabs her in the stomach. 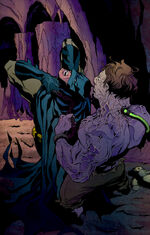 At that moment, Batman rides the Batmobile on his way to the Bald Hills Cavers; the place where Scarecrow summnoned Batman to rescue a kid by the name Colin Wilkes that Scarecrow kidnapped from the hospital and is holding hostage. Batman enters the caves and starts looking for his enemy, who speaks to Batman from the shadows. Scarecrow soon realizes that Batman has a weakness when small children are endangered and he wonders if Batman's origins are somehow connected to this. Batman manages to find Colin, but the kid is under the effects of the Scarecrow's Fear Toxin and recoils at the sight of Batman. Scarecrow then activates a device that pumps Venom into Colin's body, causing his body to expand and become larger than a regular humam being. The Venom is similar to the one used by Bane, but not as strong. However, Batman has a lot of difficulties fighting the creature.

Meanwhile, Hush has taken Selina to the Sacred Heart Convalescent Home hospital and is ready to perform a surgery on her. Soon, Hush starts remembering...

When he was a young medicine student, he would attend social events along with his mother and one occasion, his childhood friend appeared on one of the events. Marla Elliot was delighted to see the young Bruce doing so well after his various trips across the globe and she was clearly unsatisfied with her own son. Thomas greeted Bruce, but he was much somber now than he was in the past. After a brief talk, Thomas moved away from Bruce and Marla and went to grab some appetizers from a table nearby, when he was approached by a young woman who talked to him in a manner that nobody has done before. After this conversation, Thomas became good friends with Peyton Riley.

Batman is fighting the altered kid and punches him in the face. The kid, despite being transformed into a giant brute, is still a kid and as such, he gets away from Batman looking for his teddy bear, Rory. Batman takes the bear, attaches it to his Batrope and tosses the rope towards Scarecrow. The bear ends up tied to Scarecrow's arm and the kid runs at him and punches Scarecrow, with such a strength, that the villain is send flying into the air. The angered kid tries to finish Scarecrow, but Batman jumps on his back and cuts the supplying hose, stopping the venom feed from the kid's system. Soon, the kid returns to his normal size and Batman captures Scarecrow and questions him about his true intention behind the abduction of the kid. Scarecrow reveals that it was all a plot by Hush to distract Batman from the real target.

Moments later, the GCPD and an ambulance arrive at the place and Batman gets ready to leave on the Batmobile. However, he is contacted by Barbara Gordon and she informs him that Selina has been taken to the Gotham General Hospital. Batman races trough the city to the hospital and upon arriving, he finds James Gordon waiting outside Selina's room. Batman enters the room and discovers that Selina has several machines connected to her chest, since Hush has apparenty removed the heart from her body.

Retrieved from "https://dc.fandom.com/wiki/Detective_Comics_Vol_1_848?oldid=2161594"
Community content is available under CC-BY-SA unless otherwise noted.