"Batman R.I.P. Heart of Hush (Part 4 of 5) - Scars": Jonathan Crane is taken back to Arkham Asylum after being captured, but before the guards can take him to his cell, they are both knocked unconscious by a couple of Batarangs that impact

Welcome to the other side of the mirror, Bruce.

Jonathan Crane is taken back to Arkham Asylum after being captured, but before the guards can take him to his cell, they are both knocked unconscious by a couple of Batarangs that impacts their heads. Crane is surprised and he is soon attacked by Batman in front of the Joker's cell. Batman takes an access card from the guards and opens Joker's cell, dragging Crane inside. Joker is in shock and before he can react, Batman knocks him over and cuffs his ankle to a pipe, before pulling an electricidal wire from the ceiling and threatens Crane with it. Batman asks Crane for Hush's secret hideout, but Crane doesn't remember. Batman forces Crane's head into the toilet of Joker's cell and uses the wire to cause a shock wave to Crane's head. Joker is delighted to witness the scene and after enduring a short period of torture, Crane tells Batman the location of Hush's secret hideout. As Batman is leaving, the guards start to recover and Joker gives Batman a compliment for allowing him to watch him work and when Batman's gone, Joker can't help but wonder what did Crane do to deserve such treatment.

Batman in the Batmobile heads toward the Sacred Heart Convalescent Home. When he gets there, he contacts Doctor Mid-Nite and Mister Terrific at the Gotham General Hospital, where they are keeping a close eye to the heart-less Selina Kyle. They inform Batman that she seems to be stable and that is thanks to the cutting edge technological equipment used by Hush to keep her alive. They offer Batman to aid him by bringing the Justice League and the Justice Society, but Batman refuses to accept any help, since that would cause Hush to destroy Selina's heart. Mid-Nite and Terrific end their communication with Batman and they both realize that Batman is more human than they ever imagined.

Meanwhile at the Sacred Heart Hospital, Hush prepares to confront Batman and some of his henchmen inform him that Batman is soon to arrive. As Hush goes out to meet his arch-enemy, he remembers more of his disturbing past...

Thomas and Peyton
As a young medicine student, Thomas Elliot still lived with her mother, who had been diagnosed with cancer, but after the last test results, it was confirmed that she was going to live as the disease had been eliminated. However, Marla Elliot was now an elder and frail woman and didn't want to let Thomas go away, despite his desire to leave home. Marla was also frustrated with her son after he started a relationship with Peyton Riley, the daughter of a well known criminal and compared Thomas' lack of success in life with Bruce Wayne's uprise. Tired of being neglected and humiliated, Thomas blamed her and her indolent attitude when his father would beat him and instead of comforting him or help him, she forced Thomas to learn Aristotle to avoid further confontations. Thomas left the old woman, hurt after the discussion, to meet with his girlfriend at a nearby coffee shop.

Peyton noticed that Thomas was being extremely silent during their date and after asking about his situation, she learned that all he wanted to do is get away from home, but he still needed to finish his career and thus, he needed his mother's fortune. Peyton told him to let her try to talk to his mother and see if she manage to convince her of helping him achieve his dream.

Before he can continue reminiscing the past, Hush's mindless henchmen tell him that Batman has been spotted on the rooftop and Hush hurries to meet his opponent. One of his henchmen tells him to use the stairwell and Hush starts going that way, when he realizes that the henchmen who told him that is in fact Batman in disguise. Batman and Hush start fighting each other and soon they find themselves on the building's basement. Batman asks Hush why he attacked Selina and Hush replies that he knows that she is the only woman that has been able to hold Batman's heart and now he holds her heart.

Hush takes Batman across the abandoned hospital and tells him that his henchmen are mere derelicts; helpless people of no use to society. Hush then tells him that after their last encounter with the Joker, he managed to take the detonator, which would have been used to stop Hush's heart, from Joker's hands. Hush removed the pacemaker from his own heart and he started learning everything he could about the heart, including ways to remove it, restart it and most important, how to keep it alive outside the body. In this ordeal, he met Mister Freeze, who provided Hush with the technology and equipment necessary to achieve his goal. Finally, Hush takes Batman to a room full of vapor where the machine holding Selina's heart was being held. 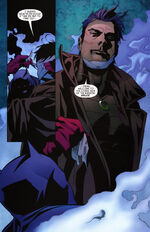 Hush has become Bruce Wayne
Batman wants to take Hush with him to save Selina, but suddenly he is unable to speak and his strength starts leaving his body. As Batman weakens, Hush explains that the vapor of the room is in fact a part of a binary compound to render the host immobile but conscious. The other half of the compound was placed on the kid who Batman saved from Scarecrow earlier that night. Batman begins to crumble and tries to grab Hush, but all he manages is to remove some of his face bandages. Hush then decides it's time to show him his ultimate plan and he starts removing all the bandages from his face just to reveal a face almost identical to that of Bruce Wayne. Hush's henchmen arrive and place Batman on an operating table and Hush tells him that he plans to act as Bruce and kill all his allies starting with Alfred and after killing all his friends and family, he will sell his company and the mansion, and leave Gotham. Knowing that the JLA will respect Bruce Wayne's decision to retire, he sees no fail in his plan. Hush prepares to operate Bruce and change his facial structure to avoid any suspicions and when Bruce Wayne dies, he will destroy Selina's heart and stop the machine keeping her alive.

Retrieved from "https://dc.fandom.com/wiki/Detective_Comics_Vol_1_849?oldid=2469585"
Community content is available under CC-BY-SA unless otherwise noted.