"Batman R.I.P.; Heart of Hush: The Conclusion - The Demon in the Mirror": Alfred is trying to open the grandfather clock when Hush breaks through the window into Wayne Manor. However, Hush's face is now resembling Bruce Wayne an

"Batman R.I.P.; Heart of Hush: The Conclusion - The Demon in the Mirror"

Batman R.I.P.; Heart of Hush: The Conclusion - The Demon in the Mirror

Hush said that when I saw your heart die, part of mine would die, too. He was right, in a way. There has only been one woman who has really held my heart.

Synopsis for "Batman R.I.P.; Heart of Hush: The Conclusion - The Demon in the Mirror"

Alfred is trying to open the grandfather clock when Hush breaks through the window into Wayne Manor. However, Hush's face is now resembling Bruce Wayne and he acts as Bruce, pretending to be wounded. Alfred helps him get on his feet, takes him away from the clock and suddenly attacks Hush with impressive movements and speed. Alfred tells him that he knows he is Thomas Elliot because the real Bruce called him from the Batmobile to warn him about Hush's plan. Hush stabs Alfred in his chest and then subdues the butler, drags him back to the grandfather clock and placing the clock hand to the right position, Hush finds the entrance of the batcave and gets ready to kill Alfred.

"20 minutes earlier..."
At the Sacred Heart Convalescent Home, Hush was telling Batman about Mr. Freeze's involvement on the development and creation of the life supports machines to keep a heart alive out of the human body and while Hush explained how he had to pay Freeze for all the equipment, Batman slowly recovered his body's movement. Batman then told Hush to hear his offering and Hush moved closer to Batman, who in turn headbutted Hush in the face and caused the mindless henchmen to come and help their master. Batman freed himself from the restraints of the operating table and fought the waves of mindless henchmen, while Hush used Batman's own Batrope to escape the place. After defeating Hush's henchmen, Batman analyzed the machine in which Selina's heart was being held and contacted Mr. Terrific to tell him all about Hush's plan and the machines that are keeping Selina alive. Mr. Terrific was going to retrieve Selina's heart while Batman chased Hush to stop him once and for all. 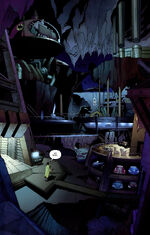 Hush is ready to shoot Alfred when Batman comes crashing through a window and tackles Hush to the ground. They start fighting in the living room of Wayne Manor and then they take the fight inside the batcave. Hush abd Batman fall down the starts into the cave and when Hush recovers, the stitches from his face have been ripped open, but he is less concerned about his wounds after he witness the magnitude of the Batcave. Hush starts walking the corridors of the gigantic place and he keeps telling Bruce how it all is a result of a scared child trying to overcompensate over his parents deaths. Hush tells Batman that his parents are probably ashamed of how their fortune is being wasted and that they would like for Bruce to move on. Batman replies that Thomas' parents would probably tell him to surrender, which Hush finds funny, considering the last living moments of his mother...

Thomas and Peyton arrived at Elliot Estate and discovered that there was someone inside the house. Upon entering, they see Mr. Robert Prescott, the Elliot's lawyer leaving the place and Thomas goes to his mother's room. Marla was waiting for him to tell him that he no longer needed to stay with her since she had cut him off from all access to the Elliot's Family funds and that it will be official once Prescott files the paperwork. Thomas is in shock and Peyton, after listening to the situation, takes her car and starts following the lawyer. She causes Prescott's car off the road and into a tree and when Prescott comes out alive, she hits him in the face with a rock, leaving him unconscious and badly injured. Peyton then calls one of her father's henchman and asks him for a favor to take care of the lawyer. Meanwhile, at the house, Thomas can't believe that his mother has destroyed his hopes and dreams and even in those moments, she kept comparing him to Bruce Wayne. Thomas couldn't take it anymore and he revealed the truth about his father's death and how he cut the brakes from the car. Marla was scared after the revelation and soon, Thomas grabbed a pillow and placed it on his mother's face, asphyxiating her while repeating the word "Hush" over and over until she was dead. Peyton entered the room to tell Thomas that she killed Prescott and that his father's people will take care of him. Thomas then came up with a story about how her mother died after an unfortunate accident. Thomas was then in possession of the Elliot's fortune and free to do whatever he wanted with it. After a while, he dumped Peyton and traveled to Paris to start studying medicine school.

After listening to Hush's story, Batman strikes back, but Hush dodges his attack and Batman ends up breaking several glass cases of the trophy room, while Alfred approaches to the Batcomputer. Suddenly, the floor starts trembling and Hush investagates the source of the noise, until he finds Alfred on the computer and decides to put an end to the man's life, but he is stopped by the robotic T-rex that Batman kept as a trophy in the cave. Hush uses his guns to shoot at the mechanical beast and after depleting all his ammo, the robotic T-rex finally comes crumbling down. However, Hush is now without weapons and he is attacked by Robin and Nightwing, who arrived just in time to aid Batman. As he was outnumbered, Hush decides it is time to retreat and he runs towards the Whirly-Bat and starts it to leave the place, with the promise of coming back and finish what he started. Batman, ditches his cape and jumped to the whirly-bat before it reached a high altitude, causing Hush to lose control of the vehicle for a while. Hush was confident that he would succeed, but Batman tells him that he ditched the cape for a reason. Hush notices that the bandages of his face are tangling to the main rotor and it starts to strangle him. Batman jumps off the vehicle and Hush, who was trying to break free, keeps going upwards until he crashed against the ceiling of the cave and exploded along with the vehicle.

A few moments later, Alfred heals some of Bruce's wounds while Robin and Nightwing search for Hush's body in the water below the cave, but all they find are some bloodied bandages and the wrecked whirly-bat. When Alfred finishes stitching Bruce's wounds, he listens to Bruce's worries about Hush's words concerning life and Alfred reassures him that Bruce has no reason to question his own life.

At that moment at the Gotham General Hospital, Dr. Mid-Nite and Mr. Terrific are operating on Selina and placing her heart back into her body. They are sure that Selina will recover after such a hard experience, but they are not entirely sure is she is ever going to be Catwoman again. As Selina is taken to the ICU, her subconscious mind starts wandering out of reality until she meets Zatanna, who wants to apologize with her for giving her a bar card reading, since all she was thinking about was Selina and Bruce and as a result, she didn't foresee the incoming threat of Hush. Selina explains that after their meeting, she was getting dressed to go and see Bruce when Hush attacked her. Selina then realizes that what she is experiencing is not real and she believes that she is dead, but Zatanna assures her otherwise. Before leaving, Zatanna gives Selina an ointment for the scars and she leaves Selina's mind, allowing her to rest and recover.

One night, Bruce goes to visit Selina at the hospital, but when he enters the room, he notices that she is asleep. Bruce starts talking and telling her how Hush's attack on her made him realize how important she is to him and that no matter what happens from now on, she will always be the only woman that capable of holding Bruce's heart and that he wil always love her. Bruce kisses Selina on the forehead as he prepares to leave, but before he can get out, Selina talks to him and tells him that she was awake and listening since he started talking. Bruce and Selina kiss each other, proving their unconditional love for one another.

Two Months Later
Selina is resting somewhere in the Caribbean and she records a video adressed to Hush, explaining how exactly did she get her revenge. After she learned everything that he did to her and about his tragic past, Selina realized that he only whay to get revenge was to take away all of the Elliot fortune from him. To achieve this, Selina asked Oracle to retrieve all the bank accounts of Thomas Elliot, she made Holly forge documents to siphon some of his fortune, she told Harley Quinn to steal his money directly from a bank's vault and asked Poison Ivy to retrieve the remaining money from all of Hush's hideout across the city. Later, she told her friend Slam Bradley that Thomas Elliot inflicted her so much pain and he started looking under every rock for him as he already suspected him as a criminal since he was a kid. Selina finishes his video by telling him that she took a great portion of his fortune, but that several millions were sent to charities and shelters.

Hush is hiding on an abandoned building in Gotham and watches the video with rage. His face is covered in bandages once more and he needs crutches to walk. Selina's last message on the video is for Hush to get out of Gotham, which would be very hard now that Thomas Elliot doesn't even have enough money for a bus fare. Hush, defeated and injured, walks away into the darkness of the city.

Appearing in "Batman R.I.P.; Heart of Hush: The Conclusion - The Demon in the Mirror"

Retrieved from "https://dc.fandom.com/wiki/Detective_Comics_Vol_1_850?oldid=2701289"
Community content is available under CC-BY-SA unless otherwise noted.