"Whatever Happened to the Caped Crusader? Part 2": Batman is present at his own funeral and he witness how people he knows, both as enemies and allies, keep telling eulogies, but all of them are different stories about his life and his death. Some of these stories include [[Elizabeth Kane (Earth

"Whatever Happened to the Caped Crusader? Part 2"

Whatever Happened to the Caped Crusader? Part 2

You don't get heaven, or hell. Do you know the only reward for being Batman? You get to be Batman.


Appearing in "Whatever Happened to the Caped Crusader? Part 2"

Synopsis for "Whatever Happened to the Caped Crusader? Part 2"

Batman is present at his own funeral and he witness how people he knows, both as enemies and allies, keep telling eulogies, but all of them are different stories about his life and his death. Some of these stories include Bat-Girl's story of how Batman sacrificed himself to save Gotham from its destruction and also Joker's story about how he killed Batman with an overdose of Joker Venom, but Batman refused to smile even in the face of death. Then, Robin started his story and how he managed to outgrew his mentor after his death. Clayface tells about Batman's sacrifice to save him and Harvey Bullock tells the story about the time when Batman sacrificed his life to save a little child.

Despite being absolutely different, all the stories seem to focus on the fact that Batman inspired both his trusted friends and his most lethal enemies. Ra's al Gul explains how Batman refused to join him and how he was killed by a scorpion sting during their fateful confrontation. At last, Superman talks how he saved Batman from a plot to kill him in Gotham, but after Batman's request, he returned him to Gotham, where he met his demise. 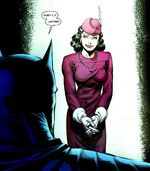 Martha Wayne in Batman's mind
Finally, Batman's extracorporeal conscience talks to the woman's voice near him and he starts to understant what is happening at the moment. After a while, Batman notices a door that wasn't there before and crosses the threshold, leaving the waking room behind and entering a place of almost complete darkness. A woman's figure is standing in a spotlight and Batman approaches her, understanding that what he is experiencing at the moment is known as a near death experience. When Batman reaches the woman, he finally is reunited with his mother, Martha Wayne, who asks Bruce what has he learned of his experience so far. Bruce has learned that no matter what happens, Batman will always keep Gotham City safe, because he never gives in. He also finally understands that Batman can never stop being Batman to live a normal life, but instead, he must always keep going until he falls in battle. As he comes to this realization, Batman remembers past events from his own history inculding the time when the GCPD would chase him as a criminal, his first encounter with Man-Bat, the time when Joker gained control of Arkham Asylum, his affair with Talia and his big defeat at the hands of Bane.

As this goes in Batman's mind, Martha tells her that he is absolutely right about everything. She then starts remembering the time they spent together, reading the "Goodnight Book", right before going out to see a movie. At that moment, an elder Joe Chill feels a ghostly presence in his bar. Martha then recalls the moment of her death along with her husband and how Bruce witnessed the scene.

Batman finally understands that this is his near death experience and he deduces that he must be about to wake up in a hospital or elsewhere, barely alive, but Martha tells him otherwise. This time, his death is inevitable, but Batman doesn't believe in the afterlife and doesn't understand what else could be there for him. Martha takes Bruce to see his own corpse one last time and she tells him that the only fate that awaits him is to be Batman. She explains that the cycle will start again and he would have a few years of true happiness before embracing his destiny. Martha then transforms into a celestial being and tells Bruce that it is time, and just like he did as a child reading the "Goodnight Book", he must now say goodbye to everything he knows.

Batman starts saying goodnight to Wayne Manor, the Batcave, the mechanical dinosaur and the Giant Penny; to the Batmobile, Alfred, Robin, Joker, Jim Gordon, all the rogues gallery, Gotham City and finally the Bat-Signal. As everything around descends into darkness, the Bat-Signal keeps shining bright and soon, it starts changing into the shape of a couple of hands that reach for a newborn baby boy which is handed to Martha Wayne in the hospital. She smiles down at the baby and calls him Bruce.

Retrieved from "https://dc.fandom.com/wiki/Detective_Comics_Vol_1_853?oldid=2643452"
Community content is available under CC-BY-SA unless otherwise noted.