What I see is that the man I once admired is long gone... if he was ever there. 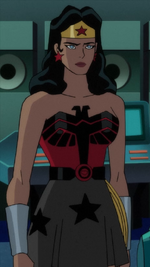 Diana is the princess of Themyscira and daughter of Queen Hippolyta. She was sent as an ambassador to the Union of Soviet Socialist Republics by the queen. Superman had to court her for political purposes, after dancing he stated that before her he never met someone similar to his abilities. As he leaned in for a kiss, she stopped him and stated that she was a lesbian. He was relieved upon hearing this and stated he didn't want a mate or sex as it was a diversion, but could use a friend.

Diana accepted to be his friend and assist him in changing the world, as she believed unlike Joseph Stalin he truly wanted what was the best. The two adventured together, but she became concerned at his crushing of all opposition by turning dissidents into mindless slaves and him trying to control the behavior of his people. She still held out hope however and resisted Hippolyta's desires to shut the Themysciran Embassy. She was also disgusted at Batman bombing civilians in his terrorist campaign.

Batman eventually captured her and bound in her Lasso of Truth, later making her call out to Superman for help. As Batman left Superman to rot in a cell after weakening him with red solar lamps and pummeling him brutally, she called him a monster, but he replied that Superman was no different. She broke her lasso to free herself, causing her to become old and frail though she enough strength to destroy the electricity generator. As Superman now confronted Batman and mocked how he will be turned into a mindless slave, Batman decided to blow himself up rather than accept this fate.

Batman's suicide horrified Diana and caused her to become disgusted at Superman's actions, while also breaking their friendship. When Superman tried to kill the Green Lanterns sent by the United States, she stopped him and asked both sides to refrain from war. She also pleaded him to cease his path of global dominance and oppression of people, asking him to let her talk to the American President Lex Luthor in order to avert hostilities.

Superman refused, thinking Luthor might turn her against him and stated his methods were necessary for global peace. This caused her to become disgusted at him and see him as just another evil man. Diana decided to permanently return to Themyscira and close the embassy, having become completely repelled at the brutality of the outside world.

Retrieved from "https://dc.fandom.com/wiki/Diana_of_Themyscira_(Superman:_Red_Son_Movie)?oldid=2577021"
Community content is available under CC-BY-SA unless otherwise noted.