He was married to Marie Trapani, sister of artist Sal Trapani. 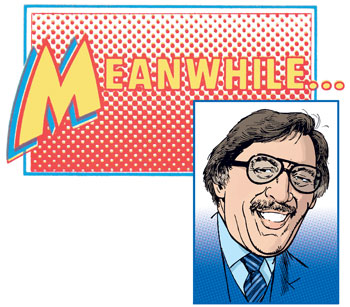 Exposed to comics as a child during a bout with scarlet fever, Dick made it his lifelong business to work in and around the fantastic characters whose exploits helped him during that tough time.

First attending the High School of Industrial Art in Manhattan (which later became the High School of Art and Design), Dick learned the ins and outs of producing commercial art for the comics and advertising worlds of the 1950s. Landing his first job at Charlton Comics in 1952, Dick subsequently worked his way up to the position of Editor-in-Chief and forged early professional and personal relationships that would last a lifetime.

In 1967 Dick made the move to DC Comics where he developed a line of innovative new series. Bringing colleagues like Steve Ditko, Steve Skeates and Jim Aparo with him, he introduced DC's readers to the likes of HAWK and DOVE, an updated AQUAMAN and THE CREEPER.

Dick would take a short leave from our halls here at DC to form Continuity Associates in 1971 with artist and friend Neal Adams. Here they supplied commercial art to advertisers while still keeping their hand in the business of comic book art. In fact, Adams and Giordano's collaboration on GREEN LANTERN and GREEN ARROW with writer Dennis O'Neil is still considered a milestone.

Returning to DC's staff in 1980, Dick was integral to the revitalization that DC (and comics in general) brought to the maturing readers of that decade. Frank Miller's THE DARK KNIGHT RETURNS, Mike Barr and Brian Bolland's CAMELOT 3000 and Alan Moore and Dave Gibbons's landmark WATCHMEN all were presented to the world during Dick's years as Vice-President/Executive Editor. These titles and more helped change the face of comics—as well as the general public's opinions of comic book material.

Always returning to his favorite friends, Dick helped DC acquire the Charlton Comics characters—heroes like CAPTAIN ATOM and BLUE BEETLE—during this tour of duty, and these are characters who still thrive in the shared DC Universe. In fact, the Charlton characters directly inspired Moore and Gibbons during the creation of the WATCHMEN.

Dick Giordano left DC's staff in 1993 and continued to draw comics—even partnering with Bob Layton and, David Michelinie to start their own line called Future Comics.

When Dick left staff in 1993 Dennis O'Neil, Archie Goodwin and I took over as a three-headed monster version of an Executive Editor—proving that Dick was working as hard as three guys.

Dick remains one of the most well-respected and beloved artists and editors who have ever worked in the comic book field. And he did share what he knew… teaching a wave of inkers in the '70s much of what he learned. People like Klaus Janson, Terry Austin and Bob Wiacek are tops in their work because of Dick's interest in helping others.

I met Dick myself in the early 1970s when I was a high school student at the High School of Art and Design. One Saturday Dick Giordano returned to his old alma mater and gave a lecture on the comic book field to any young artists with an interest in entering the business. He passed out packets with a sample script (from BATMAN #210, I remember) and told us to do three pages and he'd pick five kids for a private lesson UP AT DC COMICS!

I got picked! So thanks to Dick Giordano I was welcomed into DC's hallways and critiqued and encouraged and treated as a creator for the first time. Dick wanted everyone to enjoy his chosen profession—and to be a part of the future of comics.

When I graduated from college I worked at Marvel Comics as an editor. Despite Dick's encouragement I wasn't a good enough artist to compete with him or his trainees… but I could emulate what I saw as his style for the editorial department. And while few folks' demeanor could be as laid back as Dick's, I always approached creators and any problems with an eye towards being fair. Dick taught me to be fair.

When my time at Marvel was done… my associates managed to arrange an interview for me with Dick for a position DC had in editorial. I got picked. And for the next seven years Dick taught me more about what comics can do. He was even one of the folks who let me kill Superman (it was for his own good, after all)… because he knew that somehow you could always come back to DC.

Even though Dick passed away on March 27th of this year… he's still here at DC in all of us who work here and in the characters who live here and in you, because every one of us is the future of comics according to Dick Giordano.

Will Eisner Hall of Fame
Retrieved from "https://dc.fandom.com/wiki/Dick_Giordano?oldid=2251263"
Community content is available under CC-BY-SA unless otherwise noted.