The Doctor is a title given to Planetary Shamans who have been chosen by the Earth and previous Doctors to mend and take care of the entire planet. Although not all Planetary Shamans gain the title of the Doctor, all the Doctors are indeed Planetary Shamans. As long as there has been human life, there has always been a Doctor chosen by the Earth. It is implied that each and every Doctor is given a century to mend the damages mankind has wrought on the world, but it has been mentioned that as time moves on the chosen Doctors have ever shorter lifespans. Each time a Doctor dies, their spirit moves onto the Garden of Ancestral Memory, which the current Doctor can access for knowledge and tutoring by previous Doctors. The one who becomes Doctor is often the individual who least wants to be. Most Doctors work in conjunction with a Century Baby. There have been Doctors consisting of notable human figures throughout time, the first modern Doctor was never given or never had a name. The second, Jeroen Thornedike, was a drug addicted Dutchman. The third, Habib bin Hassan, was a Palestinian suicide bomber. The fourth and most recent is Shen Li-Men, a Tibetan egg-born woman. Most of the notable Doctors have been associated with StormWatch and the Authority. The original Doctor was created by Warren Ellis and Tom Raney, first appearing in StormWatch #48. (1997) 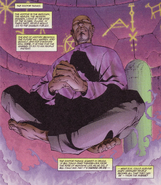