Doctor Erdel was a scientist obsessed with discovering life on other planets. His research into an experimental teleportation beam is directly responsible for bringing the Martian Manhunter to Earth, allowing him to survive the Martian holocaust. The shock of their encounter killed Erdel, leaving the manhunter with no means of returning home to his family. Doctor Erdel was created by Joseph Samachson and Joe Certa, first appearing in Detective Comics #225. (1955) 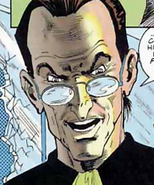