"Asylum": At the Tower of Fate, a weary Kent Nelson contemplates the events that have led up to this moment in his life. From his childhood and the absence of his mother, to his father's archeological missions in which they came across Nabu an

They think they've beaten me. They think I'm useless. That without the helmet and amulet, I'm no threat to them. They're wrong.

At the Tower of Fate, a weary Kent Nelson contemplates the events that have led up to this moment in his life. From his childhood and the absence of his mother, to his father's archeological missions in which they came across Nabu and Kent's life was changed. Only now, after so many years, Kent deduces that the death of his father was perhaps arranged by Nabu in order to get him to become Doctor Fate. However, and despite the past events, there is just one pain he cannot alleviate: the death of his beloved wife Inza. She was the only person who realized Kent's sacrifice and accepted him, willingly giving herself to something she didn't fully understand. Unfortunately, with the coming of the Kali Yuga, the power that prevented Kent and Inza from aging was gone and their accelerated decay was too much for Inza's mind. She was not able to stand the process and eventually died, leaving Kent alone and old. Kent is filled with sorrow, but before he could dwell too much on it, Nabu speaks to him in the form of the grotesque mouth in Kent's stomach and assures him that his death is close.

At that moment in Arkham Asylum, Dr. Stoner talks to a disturbed Eric Strauss and reveals himself as a follower of the Lord of Chaos called Typhon. The two of them know that Eric has been chosen by Nabu to become the next Doctor Fate and they interrogate him about the location of the Helmet of Fate and the Amulet of Anubis, two of the items that provide power to Doctor Fate. However, Eric's mind is unwell and he can't provide them the answers they require.

Meanwhile, Linda Strauss awakes in her New York apartment, screaming for Eric, her missing step-son. Linda realizes that she has an unhealthy obsession with the kid and starts a quest to locate him, although she has no clue where to start looking. As she drives out of New York towards Massachusetts, she realizes that she is in love with Eric, and although the idea of being romantically attracted to a kid is bizarre, Linda somehow knows that Eric is not just a boy.

That night in Arkham, Dr. Stoner starts a ritual under the instructions of Typhon. Stoner murders a nurse and desecrates her body, which allows the Lord of Chaos to draw arcane powers that start to expand across the asylum, killing unsuspecting people, whose life essence become part of the dark magic unleashed by Typhon. These ghostly apparitions slowly approach Eric Strauss' cell, but before they reach the man, Kent Nelson contacts him telepathically, trying to help him surrender his will to Nabu. However, the Lord of Order senses chaos approaching and takes over Eric's body immediately before Typhon's powers reach him. 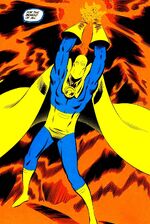 Doctor Fate manifests himself inside Arkham, vanishing Typhon's monstrous magic before confronting Dr. Stoner. Unfortunately, Stoner has allowed Typhon to merge with him, which allows the Lord of Chaos to attack Doctor Fate by surprise. Fate's powers are dimished as Eric's consciousness inside him prevent Nabu to take full contro of the human host. Eric's mind is lost, afraid and the only person he calls for is Linda, who guided by Eric's consciousness, has been guided all the way to the Tower of Fate.

Inside Arkham, Typhon defeats Nabu, forcing him to retreat back to Kent Nelson's body, leaving Eric, the Helmet and the Amulet behind. Typhon instructs Stoner to pick up the Helmet and put it on, transforming Stoner into a dark version of Doctor Fate, the most powerful agent of Chaos.

Back at the Tower of Fate, Kent reproaches Nabu's methods for taking control of a human host. He blames the Lord of Order for their defeat, for his current state and for the damage caused to Eric Strauss, coming to the conclusion that Nabu is in fact, evil. Suddenly, the Godhead appears, as a manifestation of the Lords of Order and reveals that Nabu is not truly evil, but because he has remained on Earth for too long, he has become human in his actions and decisions. The Godhead tries to take Nabu away from Earth, but Nabu refuses and the Godhead leaves. At that moment, Linda Strauss enters the Tower of Fate and finds Kent Nelson, exhausted and confused about her presence. She explains that even she doesn't know how she got there, but all she knows is that he can help her find Eric.

In Arkham, Eric has been released and he walks away from the madhouse, but his mind is clear now and thanks to a newfound determination, he knows what he needs to do in order to overcome chaos.

Retrieved from "https://dc.fandom.com/wiki/Doctor_Fate_Vol_1_2?oldid=2512819"
Community content is available under CC-BY-SA unless otherwise noted.