"Strangers": Transformed into a dark version of Doctor Fate, Dr. Benjamin Stoner wears the Helmet of Fate and the Amulet of Anubis, taken from Nabu, in order to upset the order on Earth, following the instructions of [[Typhon (New Eart

Call me Death. Call me Life. Call me man and more than man. Call me-- Fate.

Transformed into a dark version of Doctor Fate, Dr. Benjamin Stoner wears the Helmet of Fate and the Amulet of Anubis, taken from Nabu, in order to upset the order on Earth, following the instructions of Typhon, the Lord of Chaos. The Justice League International notices the strange events happening around the globe and they are summoned to their base of operations by the Phantom Stranger, who has become aware of the looming threat.

Meanwhile at the Tower of Fate, Linda Strauss demands that Kent Nelson and Nabu release their hold over Eric Strauss, who is still missing after their defeat at the hands of Typhon. Nelson explains that he is innocent and that everything is part of Nabu's plan. Finally, Nelson understands that the death of his father was also part of Nabu's plan to take control of him and use his body as the host for Doctor Fate. The realization angers Nelson, who is finally able to grief for the loss of his father. Nelson demands to talk to Nabu and tells him to leave his body and allow him to die, to be rejoined with his loved ones in the afterlife, but Nabu refuses. As they argue, Eric Strauss enters the Tower and reveals himself as capable of understanding the powers of Fate, as well as his own potential abilities. When Eric and Linda are reunited, Nelson finally understands something that remains unknown to Nabu, but decides to keep the secret until a later moment. Nabu on the other hand, is ready to take Eric and use him as his new host, but Eric's condition is that Linda goes with them. Nabu refuses, but since Eric and Kent are determined to keep the woman at their side, Nabu has no choice but to let her stay.

Elsewhere, Dr. Stoner continues his path of chaos and destruction when he is suddenly challenged by the Justice League International and the Phantom Stranger. However, the heroes are no match for Stoner, who holds the power of Fate and is aided by Typhon. One by one the members of the League are apparently eliminated, but the Phantom Stranger reveals to them that Typhon is not killing them, but sending them back to their headquarters, while making Stoner believe he is killing them. 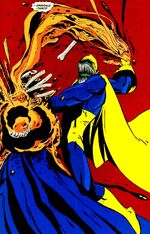 Stoner starts feeling his humanity return thanks to the words of love and compassion spoken by the Phantom Stranger. However, Typhon's hold over him is stronger and the Lord of Chaos uses Stoner to transport him and the Phantom to Egypt, where Stoner's power is increased and the Phantom Stranger is killed by the agent of chaos. Thinking himself unbeatable, Stoner decends to one of the Pyramids of Egypt as instructed by Typhon. However, as he reaches the ground, Eric Strauss talks to him, confident enough to face evil directly, knowing that he is beyond life and death, beyond even mortality; a confidence born of knowing himself the master of Fate.

Retrieved from "https://dc.fandom.com/wiki/Doctor_Fate_Vol_1_3?oldid=2512820"
Community content is available under CC-BY-SA unless otherwise noted.