"The Death of Innocence - Part Three: And I Will Fall...": Linda Strauss arrives to Apokolips as Doctor Fate to help Eric Strauss, who is being attacked by Parademons under Darkseid's in

"The Death of Innocence - Part Three: And I Will Fall..."

The Death of Innocence - Part Three: And I Will Fall...


Appearing in "The Death of Innocence - Part Three: And I Will Fall..."

Synopsis for "The Death of Innocence - Part Three: And I Will Fall..."

Linda Strauss arrives to Apokolips as Doctor Fate to help Eric Strauss, who is being attacked by Parademons under Darkseid's instructions. Linda's courage born of her deep love for Eric allows her to defeat Darkseid and his minions, even if momentarily, and she reaches Eric to merge their powers as Doctor Fate, although not their bodies.

Meanwhile, Nabu watches the fight from his apartment in New York City, when he is interruped by Jack Small and Petey. Nabu reacts violently to their presence and later he explains himself. Nabu reveals to them that Eric is dying as a result of the magical process that Nabu used to age him from childhood to adulthood and that his only hope is that the unified powers of Eric and Linda are enough to allow him to survive.

As this happens, Linda and Eric defeat all of Darkseid's Parademons, but soon they learn there are plenty more of them waiting to fight them. Darkseid confronts them and gives them a chance to surrender. Linda and Eric agree, but only as a way to get closer to Darkseid and use their magic to attack him using something nobody has ever thought about. 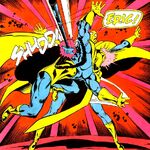 Eric's sacrifice
Linda and Eric use their magic to share with Darkseid the love that exists between them and the mad tyrant becomes helpless after the attack.

Darkseid commands his troops to retire, but a renegade minion is not satisfied with the decision. As Eric and Linda prepare to transport back to Earth, the minion throws a spear at them and Eric jumps in front of the spear to protect Linda from the attack. The spear stabs through Eric's ribs and Linda hurries to heal his partner, but it's too late. The attack weakened Eric beyond recovery and the sickness consumed him. Eric dies in Apokolips, much to Linda's despair and Darkseid's disgust, while Nabu watches the events in shock from Earth.

Retrieved from "https://dc.fandom.com/wiki/Doctor_Fate_Vol_2_12?oldid=2238702"
Community content is available under CC-BY-SA unless otherwise noted.