Doctor Jon Osterman was a nuclear physicist who was caught in a radioactive particle test, which transformed him into the godlike, emotionally detached being known as Doctor Manhattan. He protected America's interests for decades with his matter-altering abilities and precognition, but when his girlfriend broke up with him, he saw no reason to remain on Earth and abandoned the human race. He returned briefly to stop his old teammate Ozymandias, who it was believed at the time was trying to start World War III, but when Manhattan discovered he was instead trying to prevent it, he abandoned the human race again for his own ventures. Doctor Manhattan was created by Alan Moore and Dave Gibbons, first appearing in Watchmen #1. (1986) 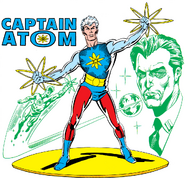 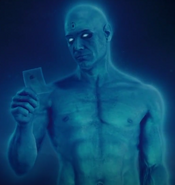 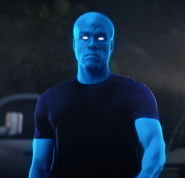