Adventurer, Fate of the Gods, Queen

I don't know, Roy. I don't know where I'm from. I was adopted age seven. I have no memories prior to that. I don't even know where my powers come from.

Donna Troy is an Amazonian that was originally created by the evil sorceress Derinoe to destroy Wonder Woman. She is a founding member of the Titans and the first Wonder Girl.

Donna was created by the Amazonian sorceress Derinoe through a magical clay ritual, with the intention of using her to destroy Wonder Woman.[4] The Amazons discovered Derinoe's plot and prevented it. In order to shield Donna from the truth of her origin, they gave her the false memory of being a normal girl who was rescued from a fire by Wonder Woman and brought to Themyscira to be raised as an Amazon.[5]

Shortly thereafter, Donna ventured into Man's World and joined the first Teen Titans alongside Robin, Speedy, Kid Flash, Gnarrk, Herald, Hawk and Dove, Aqualad and Omen, adopting the alias Wonder Girl. Donna and her teammates' memories were later wiped out by Mister Twister when they were involved with a plan that Omen could stop. Donna lost all memory of the team and her friends, and seemingly returned to Themyscira.

Donna featured in Wonder Woman's illusions, which were caused by the Gods of Olympus. In these false memories, shortly after her creation, Donna Troy was told by Derinoe that she was to be Themyscira's savior for enemies both outside and within, and was named the new Queen at the council of Amazons.[6] Donna Troy believed that the island should belong to women alone, and as such, the Sons of Themyscira had to be killed. This brought her into conflict with the queen Diana, who had sworn to protect these men.[7]. After the conflict Diana locked Donna in prison in Olympus, waiting for her to accept redemption.

With the combined efforts of her fellow former Teen Titans to stop the resurgence of Mister Twister, she would later become part of the newly re-established Titans team.

When Wally West returned from the Speed Force, he reunited with Donna and the other classic Titans to find out what was going on with the Multiverse.

Sometime after the split of the Titans, Roy went to a rehab center for superheroes known as Sanctuary in order to receive mental help. During his stay at Sanctuary Roy, Wally and many other heroes were butchered by a mysterious killer. Donna was distraught after hearing the news, and days later attended Roy's funeral. During the funeral, which was hosted on a mountain top, Donna and her fellow Titans Garth; Lilith and Gnarrk listened as Roy's surrogate brother Bird gave a speech on their fallen teammate. After Bird had finished speaking, Donna spoke on her opinion of Roy and their time in the Teen Titans and Titans together. The whole group of mourners placed items on Roy's coffin that meant a lot to him and then left him in peace.[8] Donna would routinely return to his grave stone in the mountains to reminisce about their time together, placing a rose on the tomb every time.[9] 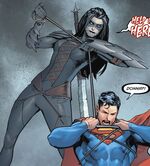 Donna was infected by The Batman Who Laughs while negotiating the brewing tensions between metahumans of Serenity Point, with the neighborhood watch set up by Borna being opposed tooth-and-nail by the dissenters led by Remy. After one of the men from neighborhood watch was injured by an unknown assailant, Donna went to the hospital to check up on him and blamed her poor leadership for the violence. The Batman Who Laughs took this opportunity to mock her for trying to fill the shoes of other heroes and baited her into his trap in the hospital. Over a week, her infection worsened while the situation in Serenity Point became violent after Remy was stabbed. Donna fled and isolated herself in the town, but the infection took complete hold of her and suppressed every other ego inside her except of a dark and raging Donna. She proceeded to take down all the members of her team, but was persuaded by Raven to stop and left the area to avoid harming her friends.[10]

Retrieved from "https://dc.fandom.com/wiki/Donna_Troy_(Prime_Earth)?oldid=2821690"
Community content is available under CC-BY-SA unless otherwise noted.