The Doom Patrol is a team formed by Dr. Niles Caulder, ostensibly to help metahumans whose powers posed a danger to themselves and others.

Retaining a lot of its history prior to the Flash altering the timeline, the Doom Patrol was formed by Niles Caulder and consisted of original members Robotman, Negative Man, and Elasti-Girl. At some point the team would expand and recruit Beast Boy and Mento as they battled the Brotherhood of Evil before the Doom Patrol eventually fractured. 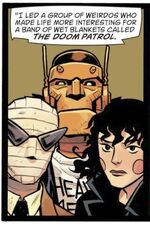 The team that crawled from the wreckage

After some downtime, the Chief would put together a new version of the group, consisting of Robotman, Rebis, and Crazy Jane. Going a new direction, the Doom Patrol would end up fighting more surrealist threats such as the Scissormen and the Brotherhood of Dada.[1]

The team went their own separate ways several times, disbanding and reforming into the modern era. 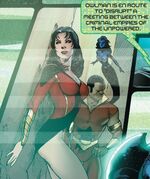 When the world seemed forever evil

During the invasion of the Crime Syndicate from Earth 3, the current, covert team of the Doom Patrol, lead by Niles Caulder, attempted to stop the Crime Syndicate and restore order. This team was comprised of Scorch, Karma, Tempest, and Celsius. However, the team was no match for the evil versions of the Justice League, who slaughtered most of the team. After learning of this roster's demise, the Chief decided to start over once again.[2]

A New Team and A Power Ring 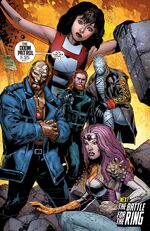 Familiar faces against the Justice League

Shortly after the defeat of the Crime Syndicate, the new Doom Patrol debuted. This new incarnation of the team consisted of former members Robotman, Elasti-Girl, Negative Man, and former Justice League member Element Woman, whom the Chief recruited by convincing her that she was abandoned and left for dead by the League.[3]

The team attempted to capture Jessica Cruz, the new Power Ring, in order to recruit her to the team against her will. During their attempt to capture her, Caulder demanded the team refuse to save civilians in a collapsing building to allow him to lobotomize Cruz and force her to serve him. The Justice League saved the people in the building, and Lex Luthor managed to hold Caulder back.

During their fight, Luthor revealed that Caulder was responsible for causing the "accidents" that gave the Doom Patrol their powers, and that former members Celsius and Joshua Clay both faked their deaths to escape from Caulder. With their morale broken, the team once again disbanded.[4]

When Danny the Street accidentally brought a comic book character he created called Casey Brinke to life, he became targeted by an alien corporation named Vectra, who sought to take advantage of Danny's powers to create unlimited meat for their fast food restaurants. Danny, in his tortured pain, attempted to get his original creation Casey to reform the Doom Patrol and save him.[5] 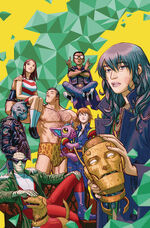 After the rude awakening that her entire life was a lie - and multiple members ending up on her door step, Casey fought back against Vectra to free Danny with a new Doom Patrol consisting of her, Robotman, Negative Man, Flex Mentallo, and Jane.

With Danny freed and a new team assembled, the new Doom Patrol would go on to fight the Brotherhood of Nada as they tried to nada-fy the world into a surrealist nothingness and the Disappointment, a character that was unhinged from any reality because his comic book series was discontinued in a higher dimension. By the end of these journeys, the team had picked up teenage magician Lucius Reynolds, Casey's talking cat Lotion, and a revamped version of Rita Farr.

The Doom Patrol would team up with the JLA against Retconn and Milkman Man in what would be known as the Milk Wars, leading to a climax that would alter all of reality.

Weight of the Worlds

Though they seemed to take a little time off, the most recent version of the team reassembled when Robotman, who had become human again in the reality tomfoolery of the Milk Wars, drove off a cliff and was restored to his old steel body.

Retrieved from "https://dc.fandom.com/wiki/Doom_Patrol_(Prime_Earth)?oldid=2659230"
Community content is available under CC-BY-SA unless otherwise noted.