This page contains information about Doom Patrol (Volume 4) . In an interview at UGO, artist/writer John Byrne discusses the idea that he chose to reboot the Doom Patrol: 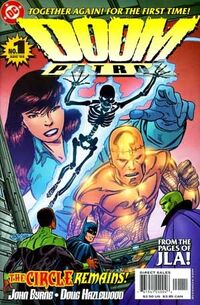 In an interview at UGO, artist/writer John Byrne discusses the idea that he chose to reboot the Doom Patrol:

JOHN BYRNE: Doom Patrol and Superman are the only titles, out of dozens I have worked on, that I have "rebooted." This is not my first choice. In fact, in both cases, the suggestion came from the editorial level. Dick Giordano wanted me to start Superman from scratch, and it was Mike who first invoked the words "Man of Steel" in reference to the Doom Patrol. Stripping away history is never the goal, in any case. Digging down and finding history that has often been buried or lost is more the issue. Doom Patrol, for instance, had drifted far, far, far from its roots. If the object was to get back to them, we reasoned, we could spend six issues undoing a lot of what had gone before, or we could spare potential new readers all that and just hit "rewind." So we end up with the book I am doing, which has much more in common with the Drake/Premiani version than what followed.

Retrieved from "https://dc.fandom.com/wiki/Doom_Patrol_Vol_4?oldid=2558831"
Community content is available under CC-BY-SA unless otherwise noted.