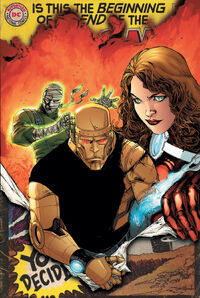 The fifth series to feature those freaks of the 60's, The Doom Patrol. Series debuts August 5, 2009. Preview available here.

Come one, come all! The world's strangest Super Heroes are back, and they brought those robot guys along with 'em! Thrill to the strange adventures of the Doom Patrol, with script by Keith Giffen and art by Matthew Clark! Whether you think you know 'em or you wouldn't know 'em if they bit you on the behind, this Doom Patrol's for you! But that's not all! Read all the way to the back cover for the all-new adventures of those elemental everymen, the Metal Men, featuring the triumphant return of the creative team that brought you JUSTICE LEAGUE INTERNATIONAL! That's 40 full pages of comic-bookery for just under four American dollars. So why not try some Doom Patrol with a side order of Metal Men today?

Keith Giffen discusses his approach on the new series at Newsarama:

The Doom Patrol are heroes in spite of themselves. They're heroes who gained their powers through tragic circumstances. They do not look at themselves as superheroes. They view themselves as freaks and outcasts. They're the ultimate superhero dysfunctional family. They didn't make the leap from, OK, I've got these powers so I'm going to be a superhero. They were kind of forced into making that leap. One of the hardest things for me is always to make that jump from, OK, Tim you've got superpowers and you can fly, so now you're going to spend all your time fighting crime. I wouldn't be out there fighting crime if I could fly. I'd be making millions, making personal appearances around the country. I'd do the Spider-Man route, or I might stop the burglar, but then I'd soak in the limelight.

I'm just going to keep using new characters as much as I can. I'm not going to be the guy who just pages through the DC Encyclopedia and chooses a villain of the month. I want the character to have some kind of resonance with the Doom Patrol.

Retrieved from "https://dc.fandom.com/wiki/Doom_Patrol_Vol_5?oldid=2587297"
Community content is available under CC-BY-SA unless otherwise noted.