So I am sick of being treated like a joke. Your bosses sent you here to hear me out, so I expect you to #@*$& listen to me!

Killer Moth is a low-level criminal from Gotham City. Killer Moth is usually depicted as a joke villain but has posed an actual threat on several occasions. 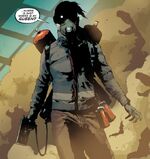 During the Zero Year, when the Riddler cut off all of Gotham from the rest of the world during Batman's first year of operation, Killer Moth became an active criminal, taking advantage of the chaos to abduct Moira Queen - mother of Oliver Queen aka the Green Arrow - in order to ransom her for money. Moth botched the kidnapping attempt and was apprehended by Green Arrow and Batman. [1]

After the Riddler was defeated and Gotham was returned to normal, Killer Moth reemerged when he attempted to hold up a charity event sponsored by Wayne Enterprises. However, he was defeated by Robin and Batgirl - the first villain they captured together.

In an unreliable account from Harley Quinn, during the time she worked as a psychiatrist at Arkham Asylum and before she became an insane criminal, she may have treated Killer Moth by exposing him to Scarecrow's Fear Toxin, revealing his obsession comes from a deep-seated fear of moths.

Six years later, Walker was an active criminal again, having made his way to Seattle to continue menacing Green Arrow. Killer Moth joined a gang of minor supervillains called the Longbow Hunters, who were attempting to claim a bounty on Green Arrow's head for Richard Dragon. Though he managed to corner his target, he was ultimately taken out by a specialty arrow. [2]

Moth would also once again burden Batgirl in Gotham, siding with a new enemy of hers named Fugue who threatened to destroy her. However, Moth was taken out by Blue Bird.

At one point Alfred Pennyworth hired private investigators Sugar and Spike to track down a number of old and obsolete Batsuits that had gone missing after they were relegated to warehouse storage and forgotten. Sugar and Spike learned that the costumes had been stolen by Killer Moth, who was actually eating the fabric.

Donning a new, tackier costume to fit in with Gotham's other super-criminals, Killer Moth formed his own gang consisting of Ratcatcher, Mr Zsasz, Solomon Grundy, and Firefly, and marketed themselves as enforcers to the city's organized crime families. However, their pitch was less than successful, because they were immediately apprehended by the Gotham Knights.

Retrieved from "https://dc.fandom.com/wiki/Drury_Walker_(Prime_Earth)?oldid=2709546"
Community content is available under CC-BY-SA unless otherwise noted.