Earth-Two was the reality designation attributed to the planet Earth, and the Universe it inhabited, that existed prior to the Crisis on Infinite Earths.

Earth-Two itself was populated by various individuals who resembled those of its primary Multiversal counterpart, Earth-One. Some were direct parallels to their predecessors (ex. Superman (Earth-One) and Superman (Earth-Two)), some less so (ex. Atom (Al Pratt) and Atom (Ray Palmer)). The two Earths were closely linked in terms of parallel development, although Earth-Two individuals usually predated their Earth-One counterparts by a few decades. For a complete list of Earth-Two inhabitants, see List of Earth-Two Characters.

Earth-One and Earth-Two vibrate differently; thus, time is slower on Earth-Two. Every twelve months, the temporal matrices of the two universes come together briefly; during this "closest orbit", for 21 days, it is easier to cross the dimensional barriers between them.[1]

Prior to the events of the Crisis on Infinite Earths, the reality termed as Earth-Two was populated by heroes who emerged during the Golden Age, including the Justice Society of America and the native incarnations of Superman (Kal-L), Batman (Police Commissioner Bruce Wayne), Robin (Ambassador Richard "Dick" Grayson) and Wonder Woman (Princess Diana Trevor, wife of U.S Army General Steve Trevor) to this reality all emerged prior to the Japanese attack on Pearl Harbor which led to the United States' involvement in World War II.

A super-advanced human civilization is destroyed by the arrival of the Fire People, which steal its radium element and release a huge atomic explosion. Just before his death, a scientist from that civilization leaves a message to future generations through uranivision, a process unknown to current science that uses radiation, warning that the Fire People should return every 1 million years.[2]

The Lord of the Order later known on Earth as Nabu, the Wise is born around this time on the planet Cilia.[3]

Nyarl-Amen
During this time, the dynasty of the underwater city of Nyarl-Amen, a race of fish-men ruled the world.[4]

Vandar Adg (Vandal Savage), a caveman and leader of the Blood Tribe is born 50,000 years ago. When he was 40 years old, a mysterious meteor crashed to the ground, bathing him in radiation, and granting him incredible intellect and immortality. An observer from the Bear Tribe would later approach that same meteorite and become Savage's eternal nemesis, the Immortal Man, possessing the power to resurrect as a new persona every time he is killed.

Atlantis is a super-scientific city with all sorts of flying inventions and modern weapons, ruled by Queen Atlantea . As Atlantis under the leadership of Atlantea prepares to conquer all the nations of the world, Green Lantern arrives for a brief visit just in time to witness Atlantis sinking into the sea and being destroyed in the cataclysm.[5] When Atlantis sinks, a large part of it survives trapped in an air pocket below the earth's crust under the Atlantic Ocean. This Atlantis eventually becomes the home of a race of great females, where they acted as their rulers and warriors, and weaker and smaller men.[6]

Vandal Savage is a king in ancient Sumer. [7] 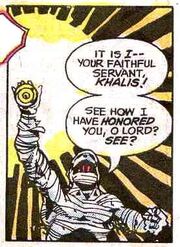 Khalis
The Egyptian deity Anubis rewarded his most devoted follower, the mad priest Khalis, with the Amulet of Anubis, holding part of the god's own power. In the following years, Khalis used the Amulet to take mental control of a legion of Nubian slaves and made them build "the mightiest of pyramids" to honor Anubis. When Nabu the Wise, a Lord of Order in human form who served various Egyptian Pharaohs, discovered the actions of Khalis, he freed the slaves from the priest's spell and let them have their revenge on Khalis. As Khalis was buried, Nabu took the Amulet as his own.[8]

The Amazons banish the sorceress Circe to the planet Sorca.[9]

Alexander the Great is brought from this age to 1942 by Dr. Doome and faces the Seven Soldiers of Victory.[10]

Per Degaton, a villain of the Justice Society, time-travels to this point of time and prevents the victory of Alexander the Great at the Battle of Arbela, preventing Greek culture from inspiring the known inventions of our time. The heroes return in time and stop the villain, repairing the timeline, and receive a shield from Alexander.

After 3,000 years fighting against the forces of Chaos on Earth, Nabu's human form was worn. In an attempt to heal his psychic wounds, the Lord of the Order puts himself in suspended animation for more than 2,000 years in an Egyptian-style pyramid built in the Valley of Ur in Chaldea.

Crimson Avenger and Wing are transported to China, captured by Dummy and sent to the past with a stolen time machine, and help defend the country against a Japanese invasion before being rescued by Shining Knight.[11]

The Starheart falls in ancient China. The meteor is carved in the shape of a lantern by Chang, a Chinese craftsman and wizard.

The Roman centurion Longinus uses his spear to pierce the side of Christ when he is hanging on the cross. In the coming years, this weapon becomes known as the Spear of Destiny.[12]

Shifted in time after facing Nebula Man, Earth-Two Green Arrow poses as Robin Hood, before he is rescued by Hawkman, Dr. Midnite and Wonder Woman. [14]

The young Henry King discovers the ability to create illusions.

Jor-L sends his only son to the Earth.
* Kal-L is born in Krypton to scientist Jor-L and Lara. The planet Krypton explodes. Jor-L and his brother Zor-L send their respective children, Kal-L and Kara, to Earth, in two distinct ships. The Kal-L spaceship arrives on Earth in Smallville, and John and Mary Kent meet him. They adopt him and name him Clark Kent. Kara's ship would only come decades later.

Queen Hippolyta of the Amazons longs to have a daughter and molds a female baby statue into clay. The gods grant her the wish by giving life to the small sculpture, and so Diana is born.

Dr. Occult begins his career as a supernatural detective.[25] 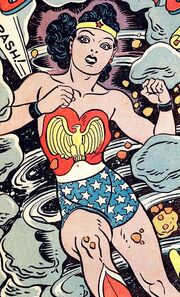 During the Crisis on Infinite Earths, Earth-Two ceased to exist, though aspects, characters, and localities from it were effectively merged with aspects of Earth-One, Earth-Four, Earth-S, and Earth-X to form one composite universe. The most noted surviving aspect was many of the non-duplicate heroes (including members of the Justice Society such as Jay Garrick, Alan Scott and Ted Grant) were recreated to be native to the New Earth reality.

By some yet unexplained occurrence, Kara Zor-L (known as Power Girl) and Per Degaton both survived the historical elimination of Earth-Two, and retain their original multiverse Earth-Two origin basis.

After the Crisis on Infinite Earths, the designation of "Earth-2" was given to New Earth by the Alexander Luthor of the antimatter Earth that was populated by the third incarnation of the Crime Syndicate. Due to the way the JLA: Syndicate Rules back cover reads some readers think "Earth-2" refers to the antimatter reality when it in fact referred to the DC Primary Earth.

Copies of some Earth-Two characters appeared as "ghosts" in the superhero-themed restaurant Planet Krypton which in reality was an arsenal.[60][61] Among the weapons in the restaurant was Alan Scott's power ring (along with Power Ring's and a regular Green Lantern ring). An Earth-Two like Superman is shown trying to penetrate a barrier around his city[62] and later realizes he has a door "even if he is not going to use it. Not today anyway."[63]

It is later revealed that hypertime played a part in the creation of a nearly identical Earth-Two analog.[64]

A copy of the Pre-Crisis Earth-Two was briefly made, along with other divergent realities, during an event called "Infinite Crisis". This incident saw the return of two Earth-Two's original denizens Kal-L (Superman) and his wife Lois Lane Kent, both of whom had disappeared into a paradise-like dimension following the events of the first Crisis. Accompanying them was Alexander Luthor - the sole survivor of Earth-Three and architect behind Earth-Two's re-creation and Superboy-Prime. This duplicate Earth-Two was barren and unpopulated and was ultimately recombined into New Earth at the end of Infinite Crisis.

In the Thy Kingdom Come storyline after the Earth-22 Superman appeared Wally West and Jay Garrick use the cosmic treadmill an attempt to visit Earth-Two and along the way they glimpse what looks like Earth-Two before arriving in the void that was Earth-Two. Later Power Girl is transported to that Earth which not only remembers "red skies" (a common reference to Crisis) but seems to be a carbon copy of the old Earth-Two; problem is it already has a Power Girl. Starman eventually reveals that Alexander Luthor's actions rebirthed the multiverse which is why the revived Earth-Two had its own Power-Girl (and why its Krytonite effected the New Earth Power Girl).

The actions of Brainiac, Parallax and the Superman of New Earth undid the events of the original Crisis, restoring Earth-Two and the rest of the infinite Earths to the Multiverse.

A significant number of American cities existed uniquely on Earth-Two, and many of these had no direct counterparts on "nearby" parallel worlds such as Earth-One or Earth-S. Examples include:

A significant number of modern nations existed uniquely on Earth-Two, and many of these had no direct counterparts on "nearby" parallel worlds such as Earth-One or Earth-S. Examples include:

A significant number of alien outposts, secret kingdoms, and lost civilizations, some populated and some not, existed uniquely on Earth-Two, and many of these had no direct counterparts on "nearby" parallel worlds such as Earth-One or Earth-S. Examples include:

The properties of matter, laws of physics, and principles of chemistry were very different on Earth-Two from those of our own world, or of "nearby" parallel continuums either.

Many devices, gadgets, vehicles, and weapons were built on Earth-Two that could never have been built or made to work on our own world.

Retrieved from "https://dc.fandom.com/wiki/Earth-Two?oldid=2668458"
Community content is available under CC-BY-SA unless otherwise noted.