You will regret trying to outsmart me. You will find my challenges and you will solve my riddles. You may not want to, but you must. It's a matter of life and death.

The Riddler was a constant nemesis of Batman who always challenged him by leaving tricky clues for the Dark Knight to find.

Edward Nashton was originally a detective for the Gotham City Police Department Cybercrimes division. Like his SWAT counterparts, Edward was highly corrupt, using his position and technical skills to create a secret spy network, accumulating a treasure trove of extortion data on Gotham City's most prominent citizens. During the Christmas Eve of Bruce Wayne's second year as Batman, Edward's plans reached fruition, as he had uploaded his extortion data into an encrypted, tamper resistant server, with the intent of releasing it onto the Internet on Christmas Day. However, Batman was able to destroy his network relays and capture his data handlers. He escaped capture and went underground, assuming the identity of Edward Nigma, the Riddler.

In Arkham Asylum, he has left dozens of clues hidden in various places at the mental facility and "congratulates" Batman for every one that he finds; oftentimes with spite.

Once Batman had successfully found all of the Riddler's challenges, he was successfully able to pinpoint the villain's location; as well as tip off the police on Nigma's whereabouts. 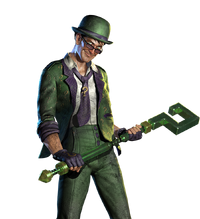 Edward Nigma played a larger role in Arkham City. In the 18 months since he was captured by Batman's efforts and, as he saw it, humiliated by the Dark Knight, he had been nursing a large grudge. Arkham City was littered with his puzzles and trophies and he even made some death traps. During the course of the story, he kidnapped a team of doctors and guards and held them hostage to make Batman play his games.

When the last hostages were rescued, Riddler was captured and set into his own humiliating trap, with some of his former prisoners there to keep an eye on him.

He's revealed to employ a large number of thugs who mainly work for the more overtly powerful gang-leaders--Two-Face, Penguin, and Joker--into doing things for him. Presumably these involve setting the traps and puzzles he designs.

He also tried taunting Professor Hugo Strange with personal knowledge of Strange's own habits. Eventually, Hugo one-upped him by revealing that he alone deduced Batman's real identity through a simple psychological profile. When the Riddler demanded to know Batman's identity, Hugo cast the Riddler's own superiority complex into his teeth, saying that if he could figure it out, it must child's play for the Riddler's mighty intellect, rendering Edward Nigma at a loss for words.

Retrieved from "https://dc.fandom.com/wiki/Edward_Nashton_(Arkhamverse)?oldid=2844629"
Community content is available under CC-BY-SA unless otherwise noted.