But just know that for all your posturing, all your strategy and gameplay, you're still nothing but a shadow. Forced to hide behind your alias. No one will ever know your name in this city. So what good is all that intelligence and maneuvering if no one knows it's you? Edward Nygma is and always will be nothing but an empty question mark.

Edward Nygma is the Riddler, a master strategist who incorporates riddles into his crimes in Gotham City, making him an enemy of its protector Batman. 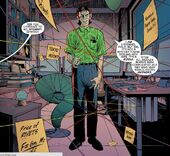 Before the first appearance "the Batman", Edward Nygma was the trusted strategist of Philip Kane, Bruce Wayne's uncle and the CEO of Wayne Enterprises during Wayne's absence, despite Nygma having what was described as a "questionable past".[1]

When Bruce Wayne returned to Gotham and threatened to uproot all the shady plans Nygma had for Wayne Enterprises, Nygma sent the Red Hood Gang after the prodigal son, only for the assassination attempt to fail. His position at Wayne Enterprises now compromised, Nygma departed to begin his endgame for Gotham, giving his boss Philip Kane his resignation in the form of trapping him in his office with a magnet.[2]

Having strategically calculated his plans for Gotham, Nygma, donning the alias "the Riddler", cut the power throughout the entire city, telling the people that they would need to get smart or die. As the lights darkened in Gotham, Riddler kicked off what would later be called "Zero Year".[3] Working with a vengeful scientist named Karl Helfern, Riddler sat back as Helfern collected all the materials needed to bring the city to its knees. While Helfern's motives were to hurt Wayne Enterprises, Riddler's motives were to make the city of Gotham smarter - to eradicate those that dumbed down the human race.[4] 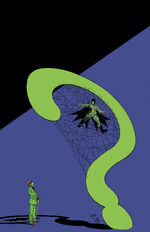 As Batman was distracted with Dr. Helfern, Riddler used the time to further the survival challenge he initiated in Gotham by blowing up the retaining walls around Gotham. The approaching hurricane that the city had been preparing for was now unchallenged, and the streets immediately flooded with several feet of water.[5] Using a special chemical developed by Dr. Pamela Isley, Riddler hastened the growth of plants throughout the city - now a dark, savage jungle under Riddler's thumb.

Working with Lieutenant Gordon and Lucius Fox, Batman discovered the Riddler's location after multiple difficult tasks to find his broadcasting spot, tracking him to the Gotham Museum. Finally coming face-to-face, Riddler challenged Batman one last time by demanding he answer twelve riddles. Batman went along with it for a bit, afraid that the villain would detonate weather balloons throughout the city if he did not play along, but ultimately punched Riddler in the face before the mastermind had a chance to ask all his questions. Turning the power back on, Riddler's reign was ended. Nygma, deemed too dangerous for the usual Blackgate Penitentiary, was put in a straight jacket and detained at Arkham Asylum. [6]

The War of Jokes and Riddles 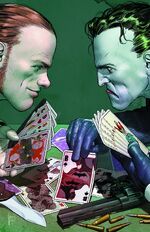 After having been imprisoned for about a year following the Zero Year, the Riddler had become a tool for the GCPD whenever they found themselves stumped during an investigation until the day he finally escaped, threatening every guard on his way out of his cell by simply reciting the names of all of their loved ones. Hearing about a seemingly inconsistent string of murders committed by the Joker, the Riddler visited the clown, telling him he deduced that the Joker had lost his ability to laugh and suggested teaming up to take down Batman would be just what he needed. However, the Joker didn't find this offer funny and shot Nygma in the stomach, beginning the event that would later be called, "the War of Jokes and Riddles".[7]

Recruiting every supervillain in Gotham they could, Joker and Riddler both amassed small armies to fight one another, leaving Batman and the rest of the city caught in the middle. For weeks the two sides fought, with Batman unable to contain the casualties caused by both armies; the Bat was forced to ally himself with one side in order to first defeat the other. Batman chose to work with the Riddler, despite Nygma having murdered Kite-Man's young son in a power play, in order to track down the Joker and finally end the war.[8]

In the final confrontation with the clown, after Batman had inevitably betrayed him, Riddler surrendered and revealed that every move of the war - even Kite-Man's involvement - was orchestrated by him as a means to solve the ultimate riddle - how to make the Joker laugh again. Batman, furious over all the civilian casualties, attempted to stab the Riddler with a kitchen knife, only for Nygma to be saved by the Joker himself, an act that was so surprising that Joker regained his ability to laugh.[9] The two criminals were both arrested and taken to Arkham Asylum.

Sometime not long after the War, Joker and Riddler returned to the streets and put their past transgressions behind them. They, along with the Penguin and Catwoman, were contacted by the Designer - a new criminal in Gotham who volunteered to make their wildest schemes a reality. The Riddler agreed to the deal and asked the Designer for unlimited access to deathtraps to use against the Gotham City police. However, the Joker caused the whole deal to fall apart and seemingly killed the Designer, and the villains burned down his base to leave no trace. [10]

Nygma would later be returned to Arkham, where he would remain until years later.

Death of the Family

With the Joker's return to Gotham, sporting his own cut-off face as a mask after a yearlong absence, the clown prince took over Arkham and began to spruce it up in anticipation of Batman's arrival. Nygma, still in his cell, asked Joker to let him out using the keycard of a dead guard. Considering Riddler to be a useful ally, Joker decided to challenge the Riddler in order to make sure he was at the top of his game for when Batman arrived. Tossing a toxic gas capsule into his cell, Joker told Riddler that, in order to survive, the mastermind had to figure out a way to get himself out of the cell. Without a problem, Riddler succeeded in his escape, using only one of the multiple ways he had thought of in advance, and joined Joker in his plan, being given the title of "strategist" in Joker's royal interpretation of Batman's rogues gallery.[11]

After the Joker's defeat, Riddler was taken back to his cell in Arkham.

When the Crime Syndicate arrived on Earth, the team of super-criminals liberated Riddler, as well as all the other villains around the country, after seemingly killing the Justice League. Nygma, taking advantage of his freedom, immediately invaded the Wayne Enterprises building in order to kill a security guard who had denied him a pack of cards five years ago. Alone in Wayne Tower, having defeated all the advanced security systems of the building, Riddler opened up a pack of cards and played solitaire, waiting for Batman to eventually return.[12]

During Joker's endgame, Riddler remained in his cell in Arkham Manor while the rest of the city was infected by Joker's mind control toxin.

When the city was saved and Batman was seemingly killed, the inmates were shipped off, and Wayne Manor was restored to Bruce Wayne, who was trying to restart his life after receiving amnesia during the Joker attack. However, Riddler, Clayface, and Mister Freeze secretly remained behind and ambushed Wayne as he attempted to move back in, hellbent on ruining his life the same way he ruined theirs by funding Batman. The villains were eventually foiled by the new Batman, and Riddler was brought back to the newly renovated Arkham Asylum.[13] 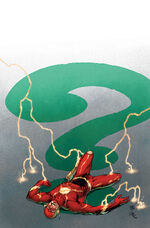 Another formidable opponent - the Flash

Sometime during his stay in Arkham Asylum, Nygma became interested in how to stop the Flash, considering him a new and formidable opponent. After a breakout, Nygma gained possession of the Flash villain Heat Wave after he had been left for dead in Gotham during the the Crime Syndicate's invasion. Next, the mastermind donated an army of "protection" drones to Central City through a collection of shell companies and waited until the police force fell right into his trap by activating them throughout the city.[14] Finally, maneuvering public opinion against the Flash, Riddler secretly convinced the police force to allow the Rogues to arrest its city's hero, under the pretense that he was a threat.[15]

When the Flash was finally captured, the Riddler revealed himself and took control of the drones that had been sent to patrol the city, threatening to use them to kill anybody if the Flash activated his powers.[16] After the Flash was saved by Pied Piper from police custody, Nygma announced that, if the Flash did not reveal his secret identity to the world, he would destroy Central City by using Heat Wave, his hostage, as a human-nuke.[17] Working together with the Rogues, who felt betrayed by the Riddler, the Flash defeated Nygma and the drones and handed him over to the Central City police to be taken back to Gotham.[18]

After Batman accidentally unleashed an ancient evil from the Dark Multiverse, one of the cross-dimensional Dark Knights called the Batman Who Laughs came to Gotham and offered some of its villains metal Joker cards that could give them powers to bend reality. Riddler, serving time in Arkham Asylum, was personally handed a card by the Batman. Riddler used his new power to create a labyrinth around the city, acting as its first line of defense against heroes who wanted to reclaim it. His compulsion to tell riddles was again his downfall though when he was defeated by the newly formed Gotham Resistance.[19]

Retrieved from "https://dc.fandom.com/wiki/Edward_Nygma_(Prime_Earth)?oldid=2709842"
Community content is available under CC-BY-SA unless otherwise noted.