Who dares summon forth the Bible-black ephemeral energies of the Enchantress?!

Enchantress is a magic-using super-villain. Her human host is the innocent woman June Moone. The Enchantress was confined within June's body by the Justice League Dark, where her power is restrained until she is called forth or breaks through. 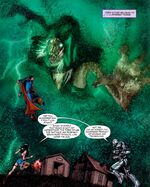 Enchantress was separated from June Moone and created hundreds of mindless duplicates to look for her across the world.[2] She began to go insane from the separation and started terrorizing the planet.[3] June got Deadman to protect her, but Enchantress crashed their car in the middle of the woods.[4] Eventually she recaptured June when Shade, the Changing Man messed up a spell that was meant to rescue them.[5] Madame Xanadu assembled the Justice League Dark to fight Enchantress. John Constantine ended the threat by binding June Moone to her once again, sacrificing one life to save hundreds from her torment.[6]

Retrieved from "https://dc.fandom.com/wiki/Enchantress_(Prime_Earth)?oldid=2807042"
Community content is available under CC-BY-SA unless otherwise noted.