Time is his domain, almost as much as mine. He has weaponized it. His name is Eobard Thawne. The Reverse-Flash.

Professor Eobard Thawne, otherwise known as the The Flash and Reverse-Flash, is a speedster from a Dark Multiverse world where after the events of Flashpoint, Barry Allen died trying to regain his powers and was replaced by Thawne as the Flash. 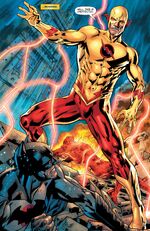 Thawne is transported from the timestream to the Dark Flashpoint world

When Barry Allen and Thomas Wayne attempted to replicate the accident that originally gave Barry his powers, Barry was killed by the bolt of lightning that had struck him. During this moment, Eobard was running through the timestream and transported to Barry's location. Discovering that Barry had died, Thawne took his Flash Ring. Free from his obsession of Barry Allen, Thawne fixated on how to make this world his vision of perfection, resulting in it being in a constant state of flux. [1]

Retrieved from "https://dc.fandom.com/wiki/Eobard_Thawne_(Dark_Multiverse:_Flashpoint)?oldid=2842515"
Community content is available under CC-BY-SA unless otherwise noted.