Ewa Krinn is the mother of Cosmic Boy and Magnetic Kid, both members of the Legion of Super-Heroes.

Terrorists blew up her neighborhood and she was killed while her husband and youngest son were severely burned.[1] 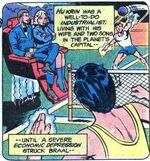