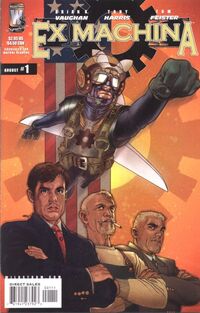 Ex Machina is an American creator-owned comic book series created by Brian K. Vaughan and Tony Harris, and published by DC Comics under the Wildstorm imprint.

The series details the life of Mitchell Hundred (also known as The Great Machine), the world's first and only superhero, who, in the wake of his actions on 9/11, is elected Mayor of New York City. The story is set during Hundred's term in office, and interwoven with flashbacks to his past as the Great Machine. Through this, the series explores both the political situations Hundred finds himself in, and the mysteries surrounding his superpowers.

Retrieved from "https://dc.fandom.com/wiki/Ex_Machina_Vol_1?oldid=1478820"
Community content is available under CC-BY-SA unless otherwise noted.