Father Time is the immortal leader of S.H.A.D.E., a government organization that uses super-powered agents to fight terrorism. This makes him a close ally to the super-hero Frankenstein, who is their top agent. His powers are unclear but he is known to possess superhuman strength, and his appearance regularly changes whenever his body regenerates. Father Time was created by Grant Morrison and Doug Mahnke, first appearing in Seven Soldiers: Frankenstein #3. (2006) 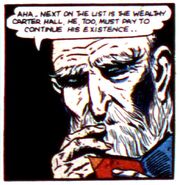