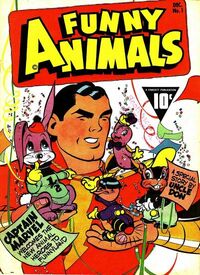 Fawcett's Funny Animals was published by Fawcett Publications from 1942 to 1953 spanning a total of 83 issues. Following issue #83, the series shortened its title to Funny Animals, the remainder of which was published by Charlton Comics. This series was significant for introducing the character of Hoppy the Marvel Bunny, who spawned his own short-lived title in December of 1945.

Retrieved from "https://dc.fandom.com/wiki/Fawcett%27s_Funny_Animals_Vol_1?oldid=2743320"
Community content is available under CC-BY-SA unless otherwise noted.