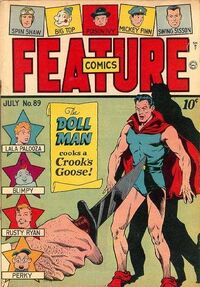 Feature Comics was an anthology comic featuring a wide variety of characters. It was formerly Feature Funnies. Feature Comics was originally published by Quality Comics, and was acquired by DC Comics when DC bought Quality in 1956.

When Feature Comics began, it was roughly half comic strip reprints and half original features (developed and owned by Quality). By issue #40, all the strip reprints were gone (except Mickey Finn, which lasted well past issue #100, and Lala Palooza, which made it to the very last issue).

Retrieved from "https://dc.fandom.com/wiki/Feature_Comics_Vol_1?oldid=2773591"
Community content is available under CC-BY-SA unless otherwise noted.