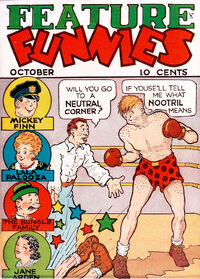 Feature Funnies was an anthology comic featuring a wide variety of characters. It became Feature Comics after issue #20. Feature Funnies was originally published by Quality Comics, and was acquired by DC Comics when DC bought Quality in 1956.

When Feature Funnies began, it was almost all comic strip reprints. As time went on, more original features (developed and owned by Quality) were added.

Retrieved from "https://dc.fandom.com/wiki/Feature_Funnies_Vol_1?oldid=2251663"
Community content is available under CC-BY-SA unless otherwise noted.