The final Bruce Wayne was from the Dark Multiverse, having been imbued with powers like that of Doctor Manhattan. 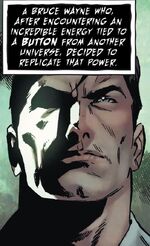 This Bruce Wayne after coming into contact with Comedian's Button, found that it gave off a powerful and strange energy. He decided to reproduce the energy he encountered and built an intrinsic field generator for the purpose, but his experiment didn't go as planned. As he went inside it to examine what had gone wrong, the Batman Who Laughs, who had been watching him secretly, shut the door of the machine and turned it on. Bruce disintegrated but after months put himself back together, having gained the power of Doctor Manhattan. Laughs lobotomized him using an energy knife while he was disoriented and kept him hidden from everyone else.[1]

His existence was however revealed by Laughs to his Dark Knights when he helped Perpetua take over the reality, so he can be used as a contingency. The Dark Knight Batmage allowed into the regular Multiverse by Batmage per Laughs' plan after he was killed by Wonder Woman.[2] The Dark Knights and the various Alfreds later had his brain replaced with that of Batman Who Laughs, in order to bring him back to life and give him nearly unlimited power.[3]

Retrieved from "https://dc.fandom.com/wiki/Final_Bruce_Wayne_(Dark_Multiverse)?oldid=2857372"
Community content is available under CC-BY-SA unless otherwise noted.