This page contains information about Firestorm (Volume 2) . The Fury of Firestorm, the Nuclear Man was published from 1982–1990 comprising a total of one-hundred issues and five Annuals. With issue number 50, the cover title o 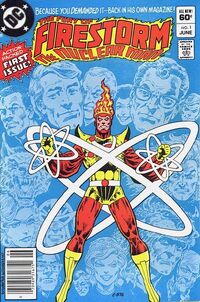 The first half of the series was written by Firestorm's creator Gerry Conway. Starting in 1987, John Ostrander took over as the main writer and took the book in a different direction, putting the hero through a number of changes in personality and appearance.

Retrieved from "https://dc.fandom.com/wiki/Firestorm_Vol_2?oldid=2504165"
Community content is available under CC-BY-SA unless otherwise noted.