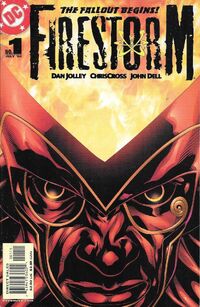 Firestorm (Volume 3) was an ongoing comic book series published from July of 2004 until June of 2007, spanning a total of thirty-five issues. The series featured a brand-new character to act as host to the Firestorm matrix - Jason Rusch.

Retrieved from "https://dc.fandom.com/wiki/Firestorm_Vol_3?oldid=2243235"
Community content is available under CC-BY-SA unless otherwise noted.