Floyd Lawton, also known as Deadshot, is the "man who never missed" - an assassin with an almost superhuman marksmanship skill. His villainous activities against Batman quickly landed him a spot on the Suicide Squad, where he soon became one of its most effective and notorious members.

According to Deadshot himself, as a child, he lived with his mother, father, and sister. His family was in a constant struggle and was very poor. One night, when his father was informing his mother the good news that he had gotten a job, the two were gunned down by bullets coming from the next room. Along with his parents, Floyd's sister was also killed in the hail of gunfire. After this, Floyd discovered a gun in the next room and began teaching himself to use it. He would eventually become a very skilled marksman and use his skills as a gun for hire.[1]

However, Deadshot's public origin story actually belonged to Will Evans, a man Lawton shared a prison cell with while serving time.[2] In actuality, Floyd's family was quite wealthy, with an estate outside Gotham. Their public image hid that fact that his father, George was an abusive drunk. His mother, Genevieve, suffered many beatings from George and took her frustrations out on Floyd and his brother Eddie. Despite this, Eddie was a great son, good natured and athletic, often taking beatings meant for Floyd.

Eventually, Genevieve had had enough and encouraged Floyd to shoot his father. Young Floyd scaled a tree and took aim at his father. His nervousness caused him to flinch. The shot missed his father but hit Eddie between the eyes, killing him. Floyd made two promises to himself that night, never to miss again and to kill his father the next time he saw him.[3]

After years of training, Lawton became so skilled with shooting, he became the mercenary Deadshot and had two daughters - Suchin and Zoe.

War of Jokes and Riddles

During Batman's second year as a vigilante in Gotham, the Joker and the Riddler battled for control of the city and for the right to kill the Bat in what would be called "the War of Jokes and Riddles". Any criminal based in Gotham was invited to pick a side - and Deadshot, having started making a name for himself, chose the Joker. 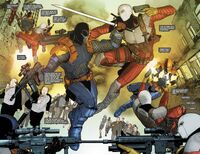 After Jim Gordon initiated and failed to resolve peace talks between the two sides, both Joker and Riddler sent snipers to stake out GCPD headquarters in anticipation of killing Batman. While Joker sent Deadshot, Riddler sent Deathstroke - the world's other deadliest assassin - and the two mercenaries soon abandoned their mission and began fighting each other. Over the course of five days, Deadshot and Deathstroke ended up killing 62 civilians that got caught in their crossfire, 28 of which died when Deadshot detonated a bomb inside a building. When Batman finally caught the two on the fifth day, he specifically targeted Deadshot, beating him so badly Lawton was immediately sent to Gotham Mercy Hospital where the doctors claimed it was a miracle he survived.[4]

At some point later, Floyd was assigned to kill Bruce Wayne by the Kobra Cult. Lawton accepted the contract, demanding 10 million dollars. The Kobra Cult then informed Floyd that he will do it for no pay, revealing that they had kidnapped his daughter, and would kill her if he did not fulfill the contract. Floyd reluctantly accepted it, although instead of killing Wayne, Floyd reached out to Batman, asking for help to save his daughter, promising there will be no casualties. Batman accepted Floyd's call for help, and together, the two cleared out the warehouse where Floyd's daughter was being held captive. With all of the henchmen down, suddenly a man held a knife to Floyd's daughters throat, threatening to kill her. Floyd impulsively shot and killed the man instantly. Knowing he broke his promise to Batman, he asked him to take his daughter to a safe place, and then himself to jail.[5]

Deadshot was, at some point, captured by Amanda Waller and forced to join the Suicide Squad. After being hired to assassinate a senator in Gotham City, the Batman attacked him, messing up his aim, and ruining the hit. That crime and others landed him on death row at Belle Reve prison. While there, his cell filled up with gas, and he was implanted with a micro-bomb to insure his obedience. After undergoing torture to test his loyalty, Deadshot was officially inducted into the Suicide Squad.

Deadshot took charge of the operation and the team was sent on their first first mission, to purge a stadium full of civilians that had been infected by a techno-organic zombie plague, and to acquire the cure for the plague. The Squad succeeded, finding the source of the infection, a pregnant woman, and killing her. Deadshot cut out the infant, who was somehow immune, and thus held the cure of the plague. After ordering Voltaic to use his powers to make sure everyone in the stadium was dead, Deadshot put a bullet in his head in order to frame him for the events in the stadium, due to the fact that every corpse had his power signature. Before the team could be evacuated, the authorities arrived, and the Squad were ordered to lay low and blend in, while protecting the baby. While performing the mission, Deadshot had become infected however, making him desperate for the cure.

Things were further complicated by the arrival of Mad Dog who had come to collect a bounty on the head of the child.

Retrieved from "https://dc.fandom.com/wiki/Floyd_Lawton_(Prime_Earth)?oldid=2858354"
Community content is available under CC-BY-SA unless otherwise noted.