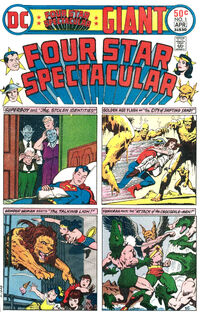 Four-Star Spectacular was an ongoing series published by DC Comics from April of 1976 until February of 1977, spanning a total of six issues. This "Giant-sized" series had a higher page count than standard titles. It reprinted stories from Golden Age and Silver Age DC Comics titles. Each issue featured four different heroes, either in four separate stories or in three stories (one of which was a team-up story).

In each issue, two of the four heroes were always Superboy and Wonder Woman. In the text column of the first issue, the editor states that Superboy was being featured because he no longer had his own series (the Legion of Super-Heroes having displaced him in his own book).

Retrieved from "https://dc.fandom.com/wiki/Four-Star_Spectacular_Vol_1?oldid=1992387"
Community content is available under CC-BY-SA unless otherwise noted.