Frances Kane was Magenta, a friend and later girlfriend of Wally West. Originally a reserve member of the Teen Titans, she later turned to villainy out of jealousy for Wally.

Frances Kane met Wally West when he was seven. They grew up friends, but when she reached adulthood, she started to exhibit strange magnetic powers. Wally tried teaching her how to use them properly, and they fell in love. As for her powers, she never really wanted them, wanting just to lead a normal life. While she turned down an offer to actually join the team, she acted as an ally for the Teen Titans as the super-heroine Magenta during instances when they really needed her assistance.

She and Wally West were seeing each other for awhile, shortly after Wally had taken up the mantle of the Flash. She helped him battle Vandal Savage. After he won the lottery, he bought a mansion in Middle Hampton, Long Island, and asked her to live with him. However, things were moving too fast for her, and she moved out.

She re-surfaced much later, interrupting an important Central City Stars baseball game to get Wally's attention. Because of her powers, she had apparently built a dark personality for herself, complete with twisted memories of her time with Wally. After a battle in the stadium, Wally managed to convince her that he still had feelings for her, restoring her to her normal self.

This episode obviously did not help matters with Wally's current girlfriend, Linda Park. A little talk between her and Frances helped to mend some of the wounds.

Meanwhile, Wally, with the help of old friends Starfire and Nightwing, had been flushing the technomob known as Combine out of Keystone City. As a going away present, they had randomly transported a bomb somewhere in the city. Wally knew that their transportation system created great electromagnetic fields, fields that he knew Frances would be able to pick up. Once they found the bomb, however, Frances was not strong enough to pick it up. Wally was forced to enrage her, like she was at the baseball stadium, to give her the strength to get rid of the bomb. After this event, they came to terms that their relationship was over, and she left.

However, she did return, in a much nastier state of mind, to Keystone City. Wally had heard from the Titans that she had already been bothering them. She used her powers to send a giant rig driving crazily throughout the city, and constructed a magnetic force-field to keep Wally out. She grabbed Linda, who was reporting the mayhem, and drew her into the force field. Since all Wally could do was remove obstacles in the path of the truck, it was up to Linda to make Frances realize that Wally was not responsible for her decisions, for who she was. In the nick of time, just before the truck was about to fall into a quarry, Frances let down the force field and Wally got them to safety. Frances then disappeared. 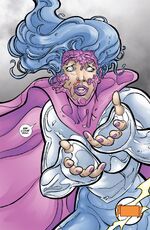 Magenta returned to Keystone during a violent uprising on the industrial district. The police and Wally tried to fight the criminals and Magenta arrived in time to assist them. However, when the crooks were finally captured, Officer Julie Jackam tried to arrest Magenta for her previous crimes, and Frances used her powers to break free and injured Officer Fred Chyre in the process. Flash grabbed her and she realized the mistake she just made, after which he decided to go along with the police.[1]

Shortly after, she was visited by Flash, who tried to apologize for his past mistakes, but Magenta attacked him without any apparent reason. When Flash removed her mask, it was finally revealed that she had been possessed and was now part of the Cicada Cult.[2] The fight continued until Magenta came up victorious and dragged Flash to the Cicada Cult Temple, where she placed him on a sacrificial altar and witnessed how Cicada stabbed Flash in the chest and drained his life force in order to revive his wife.[3] Magenta approached Flash to witness the torture from up-close , but Flash projected his electric energy unto her, transforming her into a giant magnet. Magenta was buried in a massive wave of metal elements and when Cicada was defeated, she sneaked away from the place, free from Cicada's control.[4]

Unknown to everyone, Magenta decided to join the New Rogues under the leadership of Blacksmith[5] and as part of this new criminal group, she was teamed up with Girder. She would use her magnetic powers in order to prevent him from rusting and they assisted Murmur on a crime before they were confronted by Flash. Causing havoc and risking people's lives, Magenta and the others distracted Flash long enough so they could escape.[6]

Retrieved from "https://dc.fandom.com/wiki/Frances_Kane_(New_Earth)?oldid=2838301"
Community content is available under CC-BY-SA unless otherwise noted.