Riot, real name Frederick von Frankenstein was a scientist who can create copies of himself. He is an enemy of Superman, both on his own and as part of the Superman Revenge Squad.

Dr. Frederick von Frankenstein was the last in a long line of scientists from a prominent family. His father put tremendous pressure on him to succeed: in school, in the lab, etc. The sheer volume of work proved too much for one man, so Freddy used his uncle Hal's phase shifter to create duplicate copies of himself, trying to be the best at everything. During this time, he developed a means to allow himself to stick to virtually any surface. Unfortunately, the duplication process activated a metagene--eventually, Freddy realized he no longer needed the machine to create duplicates, and his face took on the appearance of a skeleton. Also, since he was no longer one person, he could no longer fall asleep. Sleep deprivation quickly drove him insane, and his father banished him from the lab. He turned to a life of crime and adopted the name Riot.[1] 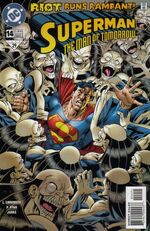 Superman first encountered Riot after a series of thefts from at bio-tech facilities. The Man of Steel quickly discovered that any forceful contact he had with Riot instantly duplicated him. Superman eventually corralled all of the Riots in a construction dumpster only to find that Riot had somehow escaped (presumably by having one holding back).[2]

Riot turned up soon thereafter, stealing a photon fuel sample from S.T.A.R. Labs. For a second time, he easily evaded capture from Superman -- but not from Morgan Edge, who managed to capture Riot in a cage when there was only one of them. Using Anomaly to beat on Riot through the bars (until the whole cage was full), Edge eventually was able to get Riot to agree to be part of the Superman Revenge Squad along with Maxima, Misa, Barrage and Anomaly himself.[3]

Despite their bickering, the team initially had some great success--they managed to bring Superman to a standstill.[4] The team quickly fell apart, when all the members realized that their employer could not fulfill all the promises he made to them. Riot used the chaos to send his duplicates back to the squad's lair. The boss had further ensured his loyalty by keeping one copy behind, shackled with a device that prevented the others from integrating him. Riot freed his copy and slipped away, while Superman the M.S.C.U. defeated the others. Presumably, Riot escaped.[5]

Riot later turned up to steal a time/phase integrator that would allow him to stay together--and get some sleep. When Superman came upon him in the midst of the theft, Riot created pure chaos--he created a legion of followers who attacked a party Lex Luthor was hosting at his tower. Riot's uncle Hal was there, and after Lois Lane learned Freddy's story, she told Superman what Riot was trying to do. Superman stopped the S.C.U. from disturbing Riot until after he had reintegrated and fallen asleep. Once asleep, he was taken into custody.[1]

Riot was one of the villains recruited/brainwashed by Manchester Black as part of the Ending Battle. Superman took him down easily.[6]

Riot was hired by Intergang to take out Clark Kent. However, after Puzzler reported the return of Superman, he and Bloodsport tried to collect the bounty on Superman, but they were easily defeated.[7]