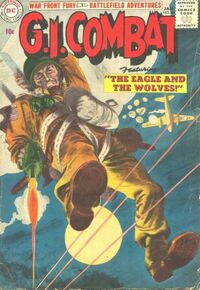 G.I. Combat was originally published by Quality Comics beginning in October of 1952. By 1957, DC Comics absorbed major portions of Quality's body of work into its own monthly publications including G.I. Combat. The title was an anthology series, usually centering around single-issue stories involving World War II. By the 1960s, many Cold War themes began to make their way into the title, but the series primarily focused on its WWII heroes such as Sgt. Rock, Johnny Cloud and the Haunted Tank. The series spanned a total of 288 issues until its cancellation in 1987. In 2010, the title would be revived for a one-shot special, and in 2012 it would be brought back as an ongoing series again.

Retrieved from "https://dc.fandom.com/wiki/G.I._Combat_Vol_1?oldid=2254717"
Community content is available under CC-BY-SA unless otherwise noted.