She seems such a normal girl... then I remember she is actually a strange being, millions of years old.

Halo is a member of the Outsiders. She is the result of the combination of a human body and a light energy being.

Violet Harper was a young woman who lived in Arlington, Missouri with her parents, Sam and Margaret Harper. Violet had a photographic memory, but despite this advantage, she was a problem child and in her teenage years, she became even more troublesome. Eventually, she met Mark Denniger and started a relationship with him, although she merely used him for her own convenience. Violet and Mark stole a drug formula from crimelord Tobias Whale, who had his operative Syonide follow them to Europe, where she eventually killed Violet in Markovia.[1] 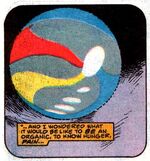 Violet's body was found by the Aurakle, who existed since the dawn of time and was intrigued by organic beings. The Aurakle's energy was somehow transferred to the dead body, giving it new life and powers, but erasing all memories from their previous existence as human and energy.[2] Just moments later, she was found by Batman and learned that she couldn't remember anything, even her own name. Because of her obvious abilities to control light, Batman gave her the codename Halo and he guided her to safety.[3] Batman and Halo later joined the war in Markovia along with other heroes and they managed to defeat Baron Bedlam. Thanks to their combined efforts, Batman decided to create a new team called the Outsiders and Halo was glad to become part of it.[4]

Halo travelled to Gotham along with the rest of the team, where Batman gave her and Katana permission to live in the penthouse above the Wayne Foundation building. Later, Halo was assisted by Bruce Wayne in order to find her a legal identity and she chose the name Gabrielle Doe[5] and became Katana's legal ward.[6] In order to keep her identity concealed, Halo had to attend high school as a normal student and she started dating.[7] As a teammate of Halo, Brion Markov showed concern for her, but using his powers as Geo-Force, he spoiled one of Halo's dates. In return, Halo did the same with one of his dates and during the ensuing argument, they realized they had romantic interest in each other.[8] 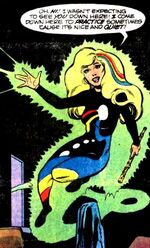 Eventually, Batman found evidence of Halo's past and learned about her human past as Violet Harper, from Missouri. Halo was taken there, where she remained with Violet's parents for a short time.[9] Living as Violet Harper, Halo learned that she had made a lot of enemies.[10] During Christmas, Halo returned to Gotham and after a talk with Geo-Force, they ended their relationship in good terms. Also during this time, Halo prevented Geo-Force from killing a criminal with help from Superman.[11]

Afterwards, Halo and Violet's parents were kidnapped by Tobias Whale, who wanted to retrieve the drug formula Violet had stolen, but of course, Halo had no memory or recollection of such situation. She summoned the Outsiders to her hometown to assist her, but sadly in the struggle, Violet's parents were killed by Syonide.[1] Halo was finally taken to the Justice League Satellite, where the Outsiders managed to recover her memories as an Aurakle, but with her memory restored, she was taken away by the rest of the Aurakles, who had come to separate the human body from the energy being.[2] Halo was taken to the Aurakle dimension, where they planned to separate them, killing her, but she was saved by the Outsiders, who forced the Aurakles to release Halo and leave them in peace. Halo was glad to return home, but she left again to find herself.[12]

Wandering alone, Halo accidentally joined a cult run by Kobra[13] and when the villains learned of her presence, they tortured her to learn Batman's secret identity.[14] She was rescued by the Outsiders and she rejoined the team to defeat the Kobra Cult.[15] Eventually, Halo decided to adopt her own identity and she got a haircut, making her previously long hair, very short and cute.[6]

After the Outsiders was framed for the murder of Markovia's Queen, which was caused by Roderick and his vampire forces, they were forced to flee. Technocrat's evil ex-wife, Marissa Barron hires an old associate named Ryer who believes Technocrat had abandoned him in Markovia. As the cyborg Sanction, he nearly kills the team in Switzerland. Later, in Gotham City, he attacks again, slaying both Marissa and Halo. As with Violet Harper, Halo's essence is sucked into Marissa's body, reanimating it.

During an attempt by the Outsiders to create a new headquarters, other Aurakles would return to reclaim Halo. Halo would later strike up a relationship with Sebastian Faust, a fellow Outsider that not many on the team trusted. The entire team is eventually cleared of wrongdoing. Halo later returns to Markovia. There she assists in combating a portal to Hell that had opened as part of the Day of Judgment incident.

During the Infinite Crisis, supervillain prisons around the world are opened as the respective wardens had been targeted and blackmailed. Halo was part of a makeshift team of heroes battling a breakout at the Alcatraz prison in San Francisco. She later joins the Battle of Metropolis, helping other heroes protect the city from an army of super-villains bent on its destruction.

Soon after the events of the crisis, she assists a team of astronauts in a space station searching for heroes missing in action. She detects traces of Zeta radiation, a sign of Adam Strange, one of the many missing.

She later became part of an other multi-hero battle, this time against the murderous Black Adam.

Halo was helping to keep spirits up in New Orleans during the rebuilding process after Hurricane Katrina when she is approached by Alfred Pennyworth. Under directions from a now deceased Batman, Alfred informs her that he wants her to be a part of a reformed team of Outsiders.[16]

During a recovery mission with the Outsiders, Halo along with the Creeper and Katana's recently resurrected family come under attack by a Black Lantern Ring. The Creeper was easily dispatched, retreats into the woods in order to get help from their prisoner; Killer Croc. While Katana battles with her husband, Halo is forced to fight Katana's children. Although her light based powers prove ineffective at first Halo unleashes more power than ever before in order to save her teammates whose abilities have no long term effect on the Lanterns. Finally she manages to destroy the Black Lantern Rings, and goes to aid the rest of her team who are also under attack.[17]

Back in their headquarters the rest of the Outsiders are faced with a recently risen Terra and are hopelessly outmatched, until Halo intervenes. With great effort she manages to separate Terra from her ring and to destroy it while Geo-Force turns Terra's body to stone in order to keep her from coming back again. Halo however disperses into light, her last words being that the "light" is calling her.[18]

Some time later, Halo returned but she had no memory of her past. Geo-Force and Katana took her as a member of the Outsiders once more and tried to help her recover her lost memories. As a team, they settled in Markovia, where Geo-Force ruled as the prince and they were soon visited by Looker. Halo attacked Looker thingking that she was an enemy but Katana explained everything to her. That same day, someone made a threat to Brion's life and the Outsiders worked together to find the killer and Halo was the first to locate the mysterious vigilante the Insider and tried to bring him down. Insider used an electrified cable to stun Halo while he faced the others. After the fight, Halo was taken back to the medical ward of Castle Markov.[19]

Retrieved from "https://dc.fandom.com/wiki/Gabrielle_Doe_(New_Earth)?oldid=2780571"
Community content is available under CC-BY-SA unless otherwise noted.