Beast Boy, real name Garfield Logan, is a member of the Teen Titans with the power to turn into any animal.

Garfield Logan was the only son of biologist Mark and Marie Logan. While the family were doing research in a jungle, Garfield was bitten by a monkey on the arm and and contracted the Sakutia virus. The only known cure for Sakutia was animal antigens and, acting quickly, Garfield parents gave him a "cocktail" of antigens as a cure. Garfield survived the virus, and the concoction mutated him to have green hair and skin as well as the ability to turn into any animal he could think of.

Not long after transforming, Garfield parents perished in a flood, though Garfield managed to survive due to his powers. [5]

Soon after that, Garfield needed direction in his life and sought the attention of the superhero team the Doom Patrol. He snuck into their headquarters and, though they treated him like any intruder, he successfully avoided them long enough with his powers to impress them. The team adopted him and raised Garfield to be a superhero like them. [6] 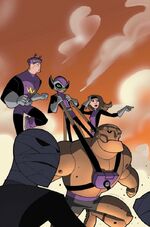 Beast Boy and the Doom Patrol

Garfield was given the codename Beast Boy to use while on adventures. He was given a purple and black spandex costume to wear to match the other members of the team. In order to appear more "mysterious" as the team recounted, Beast Boy willingly used a mask during his time with the team.

Growing up with the Doom Patrol, Beast Boy was a handful. The team's leader Mento was frequently stern with the boy, while Elasti-Girl was always gentle with him, putting the two adoptive parents at odds on the proper way to raise him.

At one point, Beast Boy developed a fascination with building and taking things apart. His hobby went out of control when, at one point, he disassembled Robotman while Cliff was sleeping. Though the team quickly reassembled him, there was a single screw leftover they couldn't seem to place.

One of Beast Boy's earliest adventures with the Doom Patrol was against Animal-Vegetable-Mineral Man. Though the villain managed to subdue most of the Doom Patrol, Beast Boy worked up the courage to turn into a ram and free them, saving the day.

At another point, in an effort to catch Madame Rouge, Mento used Beast Boy as bait to draw Rouge out of hiding in a crowded bar. Years later, Mento would retell the story, and Robin would criticize it - feeling that Mento unnecessarily put Beast Boy in danger. [7]

When Beast Boy was a teenager, he felt he needed some time away from the Doom Patrol and went to Jump City to become his own hero. There, he met the heroes Robin, Raven, Cyborg and Starfire they formed a new superhero team - the Teen Titans.

Beast Boy had a romantic relationship with a girl named Terra who had the ability to control earth. However, Terra betrayed the Teen Titans as an ally of Slade. Ultimately, she received redemption in helping the Titans defeat Slade but was turned into stone in the process. Beast Boy retained feelings for Terra until he found her reborn with seemingly no memory of him or her time as a Titan, and he finally accepted her loss.[8]

Retrieved from "https://dc.fandom.com/wiki/Garfield_Logan_(Teen_Titans_TV_Series)?oldid=2859223"
Community content is available under CC-BY-SA unless otherwise noted.