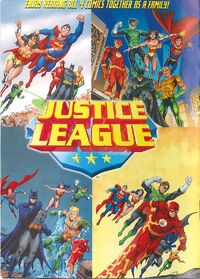 General Mills Presents: Justice League was originally a 4-issue mini-series featuring the Justice League available in and around October 2011 in specially marked boxes of General Mills cereals, including Honey Nut Cheerios. This mini-comic measured 5" by 7". The stories were "continued" on the website Big G Cereal Heroes (the stories were mostly complete in the comics; the additional content on the website was non-essential epilogues).

Several years later, issues 5–9 were released (starting in February 2014). Issues 5–8 were available in various General Mills cereals in all stores. Issue 9 was only available in boxes of Cheerios sold at Target. These stories were also continued at Big G Cereal Heroes (and the older continuations were taken down).

Retrieved from "https://dc.fandom.com/wiki/General_Mills_Presents:_Justice_League_Vol_1?oldid=2254798"
Community content is available under CC-BY-SA unless otherwise noted.