Start a Wiki
In almost every iteration, the Penny is a memento from Batman's encounter with the Penny Plunderer.

Not all pennies are little.

The Giant Penny is one of the most iconic pieces of memorabilia found in the Batcave along with the Giant Joker Card and the Mechanical T-Rex.

In almost every iteration, the Penny is a memento from Batman's encounter with the Penny Plunderer.

When a criminal who called himself Penny Plunderer started operating in Gotham City, Batman deduced that he would strike at the local coin exhibition. The Plunderer was obsessed with Pennies and in the exhibition, there was a giant-sized penny, which was the Plunderer's target along with the first one-cent stamp in history. Batman confronted the Plunderer and used the giant penny to defeat the criminal and his henchmen.[1] It is yet unrevealed how exactly Batman acquired the Penny, but after his victory over the Plunderer, Batman took the giant coin to the Trophy Room of the Batcave, where it has become one of the main features of the place.

Shortly afterwards, a criminal called Wolf Brando broke into the Batcave and confronted Batman and Robin.

Crushed Penny
The villain used some of the trophies in the Batcave to his advantage and he tried to crush Robin using the mechanical dinosaur. Batman was forced to act fast and he used the Giant Penny to stop the giant robot from crushing Robin. Because of this, both the dinosaur and the penny were seriously damaged.[2] However, both trophies were repaired and back on their places in a short time.[3]

The Giant Penny was later used as a jamming signal disruptor during the week in which Batman wasn't allowed to set foot in Gotham City and he started operating from a flying batcave. The Penny was stored in the small trophy room of the flying batcave and it proved useful in their crime fighting from the air.[4] 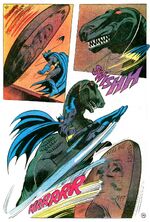 The giant penny was eventually moved along with other trophies to the second Batcave, which was located underneath the Wayne Foundation building.[6] In this location, the Penny was used against Batman during a confrontation in the Batcave with the Pi-Meson Man.[7]

When Bruce Wayne decided to move back to Wayne Manor, he took all the trophies from the second Batcave and moved them back to the original place, including of course, the Giant Penny.[8] When a common thief started using the Catman costume, he stumbled upon the Batcave while looking for his hidden loot. The crook then confronted Batman and used the Giant Penny against him. Batman was able to avoid the attack using the T-Rex and the penny became stuck in one of the cave's walls.[9]

During the fight with Bane in the Batcave, the penny was used as a weapon. Bane pushed Batman against the giant penny, causing it to lose balance and fall on top of the hero, causing great damage.[10]

After the attack of the Black Glove on the Batcave, the Penny was somehow inserted into one of the glass cases of the cave's trophy room.[11]

When Nightwing returned to Gotham, he started the reconstruction of the cave along with Alfred and Tim Drake. Robin found the penny laying in one of the deepest and darkest areas of the cave. Using a harness, they lifted the penny to the main area and placed it back in its normal place.[12]

The Giant Penny was an outdoor art piece. During Zero Year, Riddler had trapped Batman in a laser sensor grid proceeding to ask him riddles that would advance him across an ancient game board. If Batman failed to answer all of Nygma's riddles balloons containing poisons would be released across Gotham. To foil Riddler's plans Lucius Fox used the penny as a makeshift signal antenna to get signals out past Nygma's communication blackout as well as jam the transmissions to the balloons. At some point the Penny was moved to the Batcave.

It was knocked over by Wonder Woman after Booster Gold, a suspect in the killing of many heroes at the Sanctuary, escaped the Hall of Justice, and fell upon the Batmobile below.[13]

The giant penny was a staple backdrop piece in the Batcave. The penny was once a deathrap tool utilized by Two-Face. On one adventure, Two-Face and the "Two-Ton Gang" captured Batman and tied him down to the giant penny. The penny rested on an over-sized coin-flipping machine. Two-Face boasted that if the coin landed on its bad side, then the Batman would be crushed, but even if it landed on its clean side, the impact would break every bone in Batman's body. Two-Face activated the flipping device and the penny sailed through the air. Fortunately, Batman had managed to pilfer Two-Face's lucky coin and used the jagged edges to cut through his ropes. The heavy penny instead landed on two of the villain's fleeing henchmen. When Ivy asked "what became of the giant penny", Two-Face merely added "They actually let him keep it" [14] The Penny remains a staple of the Batcave for the duration of the series; albeit it's size varies from episode to episode. From only slightly higher than Batman to so large, Alfred needs a ladder in order to clean it.

In the animated series The Batman the giant penny first appears in the Second season episode Fistful of Felt where Batman uses the giant penny on display to save himself from being killed by minting equipment, the penny subsequently became a Trophy in the cave since.

Retrieved from "https://dc.fandom.com/wiki/Giant_Penny?oldid=2630726"
Community content is available under CC-BY-SA unless otherwise noted.