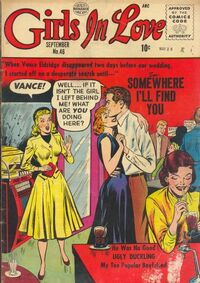 Girls in Love was an anthology comic featuring romance stories. It was formerly G.I. Sweethearts. Girls in Love was originally published by Quality Comics, and was acquired by DC Comics when DC bought Quality in 1956.

Five years before Quality started their Girls in Love, Fawcett Publications had also published a series titled Girls in Love. It does not appear that Quality bought the title from Fawcett; instead they just claimed the title after the trademark had expired.

Retrieved from "https://dc.fandom.com/wiki/Girls_in_Love_Vol_2?oldid=1912032"
Community content is available under CC-BY-SA unless otherwise noted.