Start a Wiki
This title is Suggested for Mature Readers.
This page contains information about Goddess (Volume 1) .
Goddess Vol 1 (1995-1996)
(published by Vertigo) 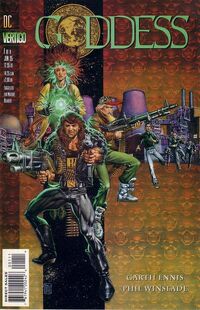 Goddess was an eight-issue limited series published from June of 1995 to January of 1996 under DC's Vertigo imprint. A preview of the series was featured in Absolute Vertigo #1, and all eight issues were collected in a trade paperback in 2002. Goddess was written by Garth Ennis with art and cover illustrations by Phil Winslade.

Retrieved from "https://dc.fandom.com/wiki/Goddess_Vol_1?oldid=2543949"
Community content is available under CC-BY-SA unless otherwise noted.