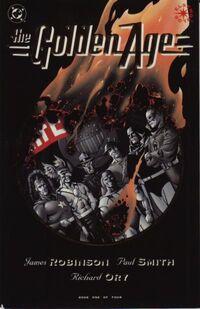 The Golden Age (later retitled JSA: The Golden Age) was a four-issue Elseworlds limited series published between 1993 and 1994, written by James Robinson and illustrated by Paul Smith. It featured Golden Age superheroes of the DC Universe having to deal with life after World War II in a world that no longer needs them.

It would be established that the events took place on Earth-Thirty-Two.[1]

Retrieved from "https://dc.fandom.com/wiki/Golden_Age_Vol_1?oldid=2663724"
Community content is available under CC-BY-SA unless otherwise noted.