Start a Wiki
The first version of the Gotham Gazette would print stories about the local vigilante Batman and some of his victories over criminals like the Joker. This caught the attention of the madman, who called to the newspaper editor and forced him to print

The Gotham Gazette is a metropolitan newspaper based out of Gotham City with nation-wide syndication.[12]

The first version of the Gotham Gazette would print stories about the local vigilante Batman and some of his victories over criminals like the Joker. This caught the attention of the madman, who called to the newspaper editor and forced him to print some of Joker's own victories over Batman. When the Dark Knight learned of this new scheme, he captured the Joker and allowed the Gotham Gazette to continue printing the usual stories.[1]

Editor Seaver prevented events like this from happening ever again, by refusing to publish anything that was requested by any sort of criminal.[2]

Some time later, the Gazette hired the talented photographer Vicki Vale, known for her work on the "Picture Magazine", and featured some of her pictures including the evidence of the murder of Bruce Wayne, which happened to be just a misunderstanding.[3]

The editor of the Gotham Gazette usually printed stories featuring the local heroes Batman and Robin, but after a few years, he started to focus more on the Dynamic Duo's arsenal against crime. For this reason, the Gazette printed several stories about the Batmobile, the Batplane and the Bat-Signal.[4]

Shortly after, a new editor started working on the Gazette. His name was Jack "Five Star" Thorpe and he started a crusade against a criminal known as "The Artisan". However, when Bruce Wayne became a reporter for the Gazette, it was revealed that Thorpe was in fact The Artisan and was using the Gazette to cover his crimes. Thorpe was soon captured by Batman and Robin.[5]

The Gotham Gazette was part of the newspaper chain that owned the Daily Planet, making it possible for the reporters of each newspaper to work on special assignments on both companies.[6]

Martin Mayne was an editor of the Gazette and he organized a contest called "I Am Batman", for charity. He selected four contestants among people who have donated for a charity foundation and allowed them to become Batman for one day. With help from Commissioner Gordon and Robin's direct assistance, the contestants were able to become Batman under Robin's instructions. The contest was a complete success, after Bruce Wayne joined the charity efforts and donated $10.000, which granted him the first place and a chance to "become Batman".[7] 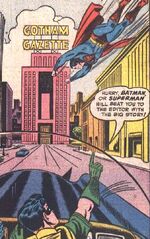 Editor-in-Chief John Hall was tasked with increasing the sales of the newspaper within a month or the directors board would close the Gazette, due to its low performance. Hall asked one of the directors' help and Bruce Wayne was glad to provide it. Using his connections, Wayne was able to get Lois Lane and Clark Kent, the top reporters of the Daily Planet, to come and work for the Gazette. When Hall was unable to perform as Editor, Lois took his place and Bruce Wayne became a reporter in Lois' place. Using their identities as Batman and Superman, Bruce and Clark were able to make some of the best articles for the newspaper and because of their assistance, the Gazette's sales improved and the directors allowed the newspaper to keep publishing. Lois and Clark's success was well received by Daily Planet Editor Perry White, whose first job was at the Gazette.[8]

The Gotham Gazette was created in the early 1800's by Edward Eliot's grandfather.[citation needed]

The newspaper reported significant events including the paralyzing of Barbara Gordon at the hands of Joker.[9]

Years later, the Gazette reported the uncertain status of Batman in an article written by Vicki Vale.[10] Weeks later, the newspaper would publish an article confirming Batman's return to Gotham.[9]

Retrieved from "https://dc.fandom.com/wiki/Gotham_Gazette?oldid=2658112"
Community content is available under CC-BY-SA unless otherwise noted.