"Batman Alive?": Millicent Mayne feels that Gotham City has survived a grievous attack and its people have been renewed with hope.

She breathes again, but rushed... like a drowning victim who has just been resuscitated -- confused, surprised to still be alive. Gotham City has survived another vicious attack. As always, her soul struggled fiercely between the red demons it could have finally succumbed to -- and the grey angels of her better inclinations.

— The Face of Gotham

Millicent Mayne feels that Gotham City has survived a grievous attack and its people have been renewed with hope.

Early in the morning of May 25, Harvey Bullock reads the Gotham Gazette and learns that Batman has returned to the city. Jamie Harper interrupts Harvey to tell him that the blood analysis from the crime scene at the church has arrived and they have now enough evidence to find the truth behind the mysterious murders. Harvey and Jamie go to the church, where they find Father Garret Day cleaning the spot where the blood was found. When Harvey brings up the name of Leland McCauley, Day has no option but to tell them a partial truth, hoping to be spared, but Harvey Bullock places him under arrest.

However, when word about this arrest came to Commissioner Gordon, he tells Bullock to find a real reason to keep Father Day behind bars and Harvey told him that there are also other people involved in the crime, making it a conspiracy. Gordon believes him, but gives him just a few hours to find the truth. Bullock starts interrogating Day and soon he learns about the Order of Purity. With this knowledge, Bullock calls Felicidad Gomez to the GCPD to confirm Day's story. Finally, they reveal the truth about Azrael and the Suit of Sorrows, taking Harvey to the place where Abraham Arlington was locked. With the responsible for the past murders locked in a special facility and a new Azrael prowling around Gotham, Bullock places a bounty on the vigilante, hoping to stop him from following the previous Azrael's steps. 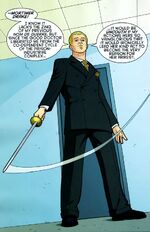 Reformed Cavalier
At that moment, Leslie Thompkins is reopening her Community Clinic with help from several members of the Hill Gang and Blackgate fugitives. The installation of the place is going well and Leslie is only worried about the dress she is going to wear for the Robinson Ball later that night. However, it comes to her attention that some vicodin has gone missing from her supplies and soon she is forced to ask the various members of the gangs and fugitives to return the drugs. When they start blaming one another for taking the drug, tension breaks and everyone draws a firearm and aims it against each other. Leslie tries to stop the violence but her pleads are ignored. However, everyone is forced to drop their weapons when Mortimer Drake, aka The Cavalier, slashes everyone's hands with his reaper causing minor injuries but enough pain to make them drop the guns. Drake is now acting as Leslie's personal bodyguard after she saved him during the riots in Gotham and he seeks redemption by protecting her and leaving his criminal acts in the past. Later in the evening, Leslie is ready to go the Ball when Richard Grayson picks her up and they all go to the Ball together.

As they arrive at the place, Spoiler watches the scene from a nearby building and realizes that every major member of the Bat-Family is arriving at the Ball. She feels a bit sad for not being one of them, but her attention is immediately changed to Nocturna, who is trying to steal from the people at the Ball. Spoiler confronts her but she is surprised when Nocturna teleports behind her to attack. Spoiler manages to dodge the attack and she activates the technology that renders her suit invisible and finally captures the villain. Tim Drake witnessed the whole scene and he isn't surprised by Spoiler's feat. He talks to her for a while and apologizes for his rudeness during their previous encounter and he also reveals that he is leaving Gotham soon. Both of them wish each other the best of luck before taking their own paths.

Meanwhile at the Ball, Vicki Vale has arrived and is looking for Bruce Wayne all across the place. However, she only manages to find Wayne's adopted sons Richard and Tim, along with Commissioner Gordon's daughter, Barbara. After a while, Commissioner Gordon approaches her and tells her that it is not too pleasant to see her back in Gotham, but their conversation is interrupted by Barbara and Richard, who ask James and Vicki on a dance. While Barbara and her father get going, Vicki greets Dick after a long time and asks him about Bruce. Dick replies that he had an appointment in Monte Carlo at last minute and couldn't make it to the ball. Vicki realizes that she has just been wasting time and she decides to leave the place, but just as she is leaving, something triggers in her mind. When she is at home, Vicki starts making connections between the Batman Family and Bruce Wayne's family, linking everyone to their secret identities. In her head it all makes sense and now, she is determined to prove it all.

As the night comes to an end, Millicent Mayne knows that Gotham City will endure any adversities because not only the people are willing to fight, but also because The Dark Knight has returned.

Retrieved from "https://dc.fandom.com/wiki/Gotham_Gazette:_Batman_Alive%3F_Vol_1_1?oldid=2126905"
Community content is available under CC-BY-SA unless otherwise noted.