"Batman Dead?": The nights in Gotham City have changed since Batman's disappearance because the Bat-Signal shines bright in the sky, but there is no reply and Millicent Mayne watches as her city descends into a dark abyss of corruption and lost hope.

A dark knight had kept the city's shadows at bay for so long, but now, a dark night looms with his absence. Even if its citizens try their very best... if no one deigns to wear the cowl and answer the signal's yearning call for help... does Gotham City have any hope for salvation... ?

— The Face of Gotham

The nights in Gotham City have changed since Batman's disappearance because the Bat-Signal shines bright in the sky, but there is no reply and Millicent Mayne watches as her city descends into a dark abyss of corruption and lost hope.

Earlier in the morning of March 4, 2009, the Gotham Gazette features a printed section by Vicki Vale under the headline Batman Dead?. At the Gotham Gazette Office, some of the longtime journalists resent Vale the fact that she managed to be featured in the front page of the morning edition, despite the fact that she had barely returned to the printed media after her time working on TV. Her colleages insist that most of the work on her article was done by other people and they bring up the fact that due to her short period of work in the office, she can't assist to the Robinson Ball. Vicki ignores their mean-spirited comments and tries to contact Bruce Wayne by calling to Wayne Manor and to his cellphone, but nobody picks up. Gloria, her former assistant and current editor tells Vicky to get information about Bruce Wayne, for their gossip section and she gives her information that Wayne had been sighted at Jamaica, Australia and Vietnam, but nowhere in Gotham. Vicky agrees to get the information because it could also mean that she can get Bruce to invite her to the Robinson Ball. She goes to the Peregrinator's Club, where Bruce was last seen and talks to the manager; later she goes to talk to Lucius Fox at the Wayne Foundation and lastly, she goes to Wayne Manor, but nobody couldn't give her any lead to Bruce's whereabouts. After a long day of investigation, Vicky returns to her apartment, exhausted but satisfied with her job.

Vicki Vale
When she opens the door, she hears a loud noise inside and when she turns on the lights, she notices that the source of the noise was an electronic timer attached to a bottle opener. In the middle of the room is a bed of red roses and a mechanical pulley that pours champagne on a flute and next there is a letter for her. She reads the message and she is overwhelmed to see that it is an invitation to the Robinson Ball from Bruce Wayne. 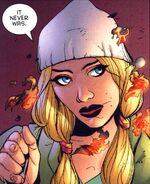 Stephanie Brown
Meanwhile, at the corner of Breyfogle and Wayne, at a newspaper stand, some newspapers are burned by a group of vandals and the owner struggles to put the fire out while the criminals escape. Stephanie Brown witness the situation, but keeping her promise of staying out of trouble, she walks by without trying to help. During her walk, Stephanie reflects on the dangers of the city and she notices a robbery in progress inside a house and she climbs to the ceiling, knowing that the criminal is most likely to escape through the rooftop. Once at the top, she realizes that the criminal has already gotten out and escaped on a hot air balloon. Stephanie recognizes the criminal as Nocturna and she manages to tie one of the balloon's ropes to the rooftop and prevents her escape. At that same moment, Robin arrives at the crime scene and takes out one of Nocturna's henchmen, just to realize that the villain has already escaped. Robin rides his Robin's Motorcycle and follows the criminal, while Stephanie watches him leave. Stephanie keeps walking until she arrives at the Gotham Central Hospital, where she meets her mother and together they go home. Once there, Crystal starts preparing dinner and Stephanie goes to her room before joning her mother. However, once in her room, she notices the Spoiler costume laying on her bed and she realizes that the city is calling for her.

Elsewhere, a taxi driver takes Leslie Thompkins to a hotel, where she plans on staying until she finds a definitive place to stay after being gone for almost a year. Leslie realizes that the general feeling of the citizens of Gotham is that the city is going through the worst times when the taxi driver and the bellboy at the hotel warn her about the various dangers of the city. However, after checking in the hotel and leaving her baggage, Leslie decides to take a walk outside and take a closer look at the situation. 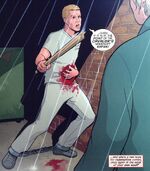 Injured Cavalier
As she walks the streets, she notices a clear dispair on the people's faces and she realizes that the city has lost something important. Suddenly, a GCPD van appears behind her and she knows that it is transporting some of the Arkham Inmates that the bellboy warned her about. Leslie is struck by a explosion that damages the van and allows the prisoners to escape. As she recovers, she notices how the police tries to keep the prisoners contained but she also notices a trail of blood near the alley where she was standing. Leslie follows the trail of blood and she finds an injured Mortimer Drake, a.k.a The Cavalier, who threatens her wielding a splinted stick as a sword and she decides to heal the man as her first step towards redemption.

At that moment, the Major Crime Units of the Gotham City Police Department go to a crime scene on the sidewalk of a restaurant. Harvey Bullock and Jamie Harper examine the scene and they can't understand how could a man be beheaded without leaving any blood on the surface. Jamie thinks the rain could have washed the blood, but Bullock knows better. Jamie thinks that they shouldn't be working on that case since she is just three weeks as member of the MCU and Bullock is considered Gordon's pet. Bullock doesn't mind what the others think but Jamie feels like she's going to fail. Moments later, they return to the GCPD Headquarters, where Bullock is looking to talk to Gordon, but Captain Sawyer prevents him from bothering Gordon and tells him to keep working on the case. Jamie tells Bullock her concerns about the case and her future if she fails her first mission. Bullock tells her that if they fail, she could always blame him for everything and save her career while she doesn't need to worry about the case because it is obvious that Sawyer intended this case to be Bullocks' downfall. Later, Bullock and Harper go to the coroner's office to get the final results of the autopsy of the body. The doctor informs them that the victim's head was severed from an upper angle and that the reason why there was no blood on the scene, was because the wounds were cauterized by an incredible amount of heat. Bullock and Harper go back to the crime scene to find more clues and Harper suggests that the killer must be a very tall person, but Bullock seems to think that instead, the killer dropped from above the victim and he tells Jamie that he thinks he knows who is the killer.

As the night moves forward, Millicent Mayne witness how the people of Gotham withstand the burden after the loss of their Dark Knight. She watches the Bat-Signal in the sky and wonders if there is someone who will take up the mantle of the bat or if there is any hope for salvation for Gotham City.

Retrieved from "https://dc.fandom.com/wiki/Gotham_Gazette:_Batman_Dead%3F_Vol_1_1?oldid=2512349"
Community content is available under CC-BY-SA unless otherwise noted.