Start a Wiki
The mysterious Guru Chud gained a small group of five loyal followers who he trained to perform a ritual, which he claimed would summon the great destroyer to Earth. Guru Chud unfortunately died before the ritual was ever mastered, but his devotees kept his body propped up and revered him as always,

Temple of the Green Dragon Society

The Green Dragon Society was a doomsday cult created by the Guru Chud, whose prophecy claimed a Great Destroyer would come from the sky to cleanse the world by bringing about the apocalypse.

The mysterious Guru Chud gained a small group of five loyal followers who he trained to perform a ritual, which he claimed would summon the great destroyer to Earth. Guru Chud unfortunately died before the ritual was ever mastered, but his devotees kept his body propped up and revered him as always, although some began to doubt his teachings when no progress was made with the ritual. The Brothers prayed for a sign, to give them the strength they required to continue with his teachings, and it was answered with a knock at the front door.[1] 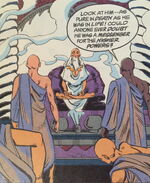 The stranger at the door was Jason Blood. He had travelled to the Himalayas seeking guidance to help him recover the missing memories of his past. He had been turned away by all the spiritual men he came across, for they could sense the evil attached to his soul. The Brothers of the Green Dragon Society on the other hand, welcomed him into their temple. Brother Wu instructed Blood in the art of meditation, but while the newest member sought solace from his demons, the Brothers hoped to utilise his dark power to expedite the Destroyer's arrival. While Blood slept, they secretly conducted the ritual, hoping to tap into his magic potential. Blood's sleep was interrupted by the Phantom Stranger who tried to reason with him, appealing for his return to Gotham City. When Blood refused to leave since he was making progress at the temple, Stranger tried to talk sense into his other half, but trying to reason with Etrigan was futile, and so the Stranger abandoned his efforts to prevent the apocalypse.[2]

While Blood continued his meditation in solitude, the Green Dragon Society attempted the summoning ritual again, drawing energy from him. This time they succeeded in opening a portal in the sky, and the Destroyed emerged, revealing himself to be Lobo.[3] Not happy about being inconvenienced, Lobo demanded to know how, and why he'd been dragged across the universe to Earth. They tried to explain and showed him their mentor, the body of the Guru now lying unceremoniously on the floor. Lobo recognised the corpse as his old drinking buddy Chud, an Antarean conman who created religious on different planets to dupe the faithful for his own gain. After searching the cadaver and finding a damaged communicator, Lobo reasoned that Chud taught them the summoning ritual as a means to get him off the planet. When the Brothers asked if he would be 'cleansing' the Earth, Lobo decided it would be a fitting memorial to Chud, and agreed to help them by stealing an atomic bomb. Blood overheard their plans and tried to stop the Czarnian, but he was easily overpowered. To save the world, Blood unleashed the Demon to stop the alien threat.[4]

Lobo's goal was thwarted by Klarion the witch-boy. With the world still in tact, and Chud revealed to be a fraud, the Brothers unceremoniously threw his body over the side of the temple. No longer wishing to stay at the counterfeit sanctuary, someone suggested a guru in Delhi who taught tantric yoga, and they started their journey down the mountain.[5]

Retrieved from "https://dc.fandom.com/wiki/Green_Dragon_Society?oldid=2630875"
Community content is available under CC-BY-SA unless otherwise noted.