"The Sign": A young Hal Jordan and his brother Jack watch their father, Martin, as he tests a plane at Ferris Aircraft. Something goes wrong, and Martin's plane crashes in a fiery wreck before Hal's very ey

The Corps is the root of all order and knowledge. The Corps is the maintainer of life and guardian of truth. Without the Corps there would be only chaos and darkness. The Corps is without fear. Without anger or corruption. It is the creation of a highly-evolved mind and maintained by like beings whose destiny it is to maintain the order of things in the universe. The Corps has battled against the forces of chaos for a millennium. To serve is the ultimate honor. Knowledge is the sum of all reason and perception. Power is force prevailing over mass. Power without reason is chaos. Force without knowledge is destructive. The Corps is ultimate knowledge harnessed to ultimate power. The Lantern is the source.

A young Hal Jordan and his brother Jack watch their father, Martin, as he tests a plane at Ferris Aircraft. Something goes wrong, and Martin's plane crashes in a fiery wreck before Hal's very eyes.

Years Later, Hal and his friends are having beers at a bar. Hal's rival, Biff, teases him for getting fired from Ferris Aircraft and then being re-hired after his mother called to complain, using Martin Jordan's legacy as leverage. Hal took a pay cut and can no longer fly aircraft.

As an apparently drunk Hal is taking his friends home, he is preoccupied with his anger at Biff, and he panics when he drives too close to a roadside billboard and crashes his Jeep. Hal ends up in the hospital, but his injuries aren't bad. His friend Andy, however, is seriously hurt. Hal's ex-girlfriend Carol Ferris is quite mad at him, as is her father, Carl, the owner of Ferris Aircraft - particularly because Andy is their star pilot. 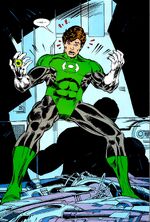 First time in the costume

Back at Ferris Aircraft, Hal is testing a flight simulator, despite the fact that he has not fully recovered from a head injury. Somehow, his simulator crashes through a wall and flies off. While in the air, Hal hears a voice talking about the nature of order and chaos, and a Corps that is without fear, anger, or corruption. When Hal finally lands - miraculously unharmed - he is in the middle of the desert, and a crashed alien spaceship is in front of him. Hal is forcibly brought inside the ship, where he meets Abin Sur, the Green Lantern of Sector 2814. Abin Sur is dying, and he informs Hal that he has been chosen to be his successor. Hal says he isn't interested, but the ring flies off Abin Sur's finger and onto Hal's as the alien dies. Hal panics and bursts out of the spaceship. When he is several hundred feet in the air, he realizes he is flying. Hal then finds a telephone and calls Carol. She is furious, since she thinks he stole the flight simulator, and she tells him that his friend Andy may be paralyzed for life.

While flying, Hal wonders why all this has happened to him. Then, seeing the yellow sign that caused his accident, Hal becomes enrage and bursts through it. Unexpectedly, he is injured.

Retrieved from "https://dc.fandom.com/wiki/Green_Lantern:_Emerald_Dawn_Vol_1_1?oldid=2513252"
Community content is available under CC-BY-SA unless otherwise noted.