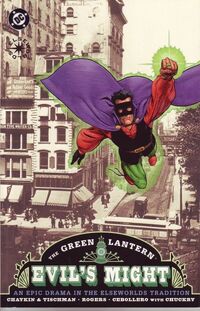 Green Lantern: Evil's Might is a three-issue comic book mini-series published in 2002 by DC Comics in that company's Elseworlds imprint. It is written by Howard Chaykin and David Tischman, and illustrated by the late Marshall Rogers.

The story takes place in 1888 in New York City, and uses the infamous Boss Tweed as one of the main villains and Tammany Hall political machine as a plot device.

Retrieved from "https://dc.fandom.com/wiki/Green_Lantern:_Evil%27s_Might_Vol_1?oldid=1693301"
Community content is available under CC-BY-SA unless otherwise noted.