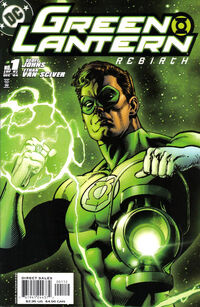 Green Lantern: Rebirth was a 6-issue miniseries which ran from December 2004 to May 2005. It is most notable for seeing the return of Hal Jordan as Green Lantern and the introduction of the retcon of Parallax being a separate entity that caused both the Yellow Impurity and Jordan's mental breakdown during Emerald Twilight. In addition, several significant changes to Green Lantern characters were made: Hal Jordan was separated from the Spectre, revived, and reinstated as a Green Lantern. Guy Gardner lost the "Warrior" biological implants and was reinstated as a Green Lantern. Kilowog was revived, as well as the Guardians of the Universe and Sinestro.

In addition to the revival of the classic Green Lantern Corps mythos, the series is the first part of the War of Light trilogy developed by Geoff Johns and Ethan Van Sciver, and would see the introduction of a number of common aspects in triology's storyline, including the Emotional Spectrum, and many visual aspects developed by Van Sciver, including the "siren" concept and the presence of Lantern Corps symbols in the eyes of individuals as visual cues.

Retrieved from "https://dc.fandom.com/wiki/Green_Lantern:_Rebirth_Vol_1?oldid=2545754"
Community content is available under CC-BY-SA unless otherwise noted.